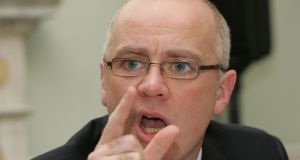 David Drumm: a year into a six-year prison sentence

Former Anglo chief executive David Drumm was expelled as a CAI member on Wednesday and fined €15,000 for being involved in the bank’s receipt of €7.2 billion of fake deposits from Irish Life & Permanent (IL&P) in September 2008 to make the ailing bank look more healthy than it was, and, months earlier, masterminding a deal to provide a group of clients €450 million to buy stock in the bank.

The CAI’s conduct committee took a pragmatic approach in making its case, focusing on those two sets of transactions, which had already been established by a criminal court last year to have been fraudulent.

An original case outlined in 2010 included three other issues, including Drumm’s role in relation to former Anglo chairman Seán FitzPatrick’s habit of moving his bank borrowings off balance sheet at the end of accounting periods. By dropping the three other strands, the CAI has saved time and money.

In Drumm’s absence – he’s a year into a six-year prison sentence – his solicitor Michael Staines said that the €450 million loan came about after Anglo faced an “absolute existential crisis” when it emerged in 2007 that businessman Seán Quinn’s family had built up a clandestine 27 per cent stake in Anglo.

The stake needed to be unwound in 2008 as the banking crisis set in. Regulators had been well aware of the loans, and the “green jersey agenda” that led to the IL&P deposits. But that didn’t protect Drumm.

Drumm’s case is only one of five initiated following the crash. The conduct committee is still looking into the actions of Fitzpatrick, one-time Anglo finance director Willie McAteer, former IL&P finance director Peter Fitzpatrick and Anglo’s pre-crash auditors EY. All remain open, according to a CAI spokeswoman. The ghost of Anglo continues to linger.