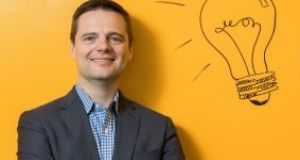 Workhuman co-founder and chief executive Eric Mosley: ‘We’re really just at the tip of the iceberg in terms of how we can grow the business’

The company, formerly known as Globoforce, operates employee reward and incentive schemes for some of the world’s biggest companies. It announced 150 new jobs in the Republic earlier this year as part of a €4 million expansion at its Dublin hub.

Speaking to The Irish Times, co-founder and chief executive Eric Mosley said the company was continuing to record strong sales as more organisations come to see the value in recognising employee performance.

The last set of publicly available accounts for Workhuman showed it recorded a more than 150 per cent rise in pre-tax profits in 2017 to $9.7 million (€8.7 million).

“On average over the last two years we’ve grown 35 per cent per year and are at that again for 2019 with over $700 million in billings forecasted, which is phenomenal,” said Mr Mosley.

“We’re really just at the tip of the iceberg in terms of how we can grow the business, though,” he added.

Workhuman has invested $60 million in research and development and product innovation at its Dublin base since 2013. While the company was founded in the Republic, it previously relocated part of its operations to the US where it currently derives the majority of revenues.

Mr Mosley said Dublin remained central to the company’s plans, especially given the fact that a significant chunk of new business is coming from organisations in Europe.

“European sales are modest and represent less than 10 per cent of revenues, but they are doubling every year as companies catch up with the US in recognising employee performance. I would see Europe eventually accounting for at least a third of our business,” he said.

Workhuman provides a software-as-a-service (Saas) platform that delivers reward programmes on behalf of over 300 companies that collectively employ more than four million people in 150 countries. In recent years it has stepped up the use of data analytics to prove the impact of employee recognition.

The company has added more than 100 staff so far this year to take total headcount to about 600, of which over half are in Dublin.

Workhuman pulled out off a planned Initial Public Offering (IPO) on the Nasdaq in March 2014, citing unfavourable market conditions. Mr Mosley said the company continued to consider a public listing but that there was no definite plan as to when this might happen.

“We’re in no rush because there’s no pressure on us to do it. If you look at most tech companies going public, they have to scale quickly, but we don’t. A lot of the investments we’ve made, such as in our data science capability, are really starting to pay off and we want to give them room to grow, so I think an IPO would be a distraction in the next year. After that we’ll definitely think more about it,” he said.