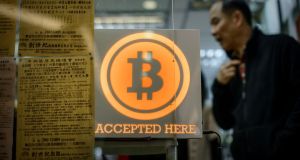 Bitcoin is heading for its biggest weekly jump since June as rising geopolitical risks boosted demand for alternative assets.

Bitcoin is heading for its biggest weekly jump since June as rising geopolitical risks boosted demand for alternative assets.

The last time it was at such levels was in January 2014, when bitcoin was tumbling from its record price of $1,137 following the implosion of the MtGox exchange and tightening Chinese controls.

Bitcoin is extending a rally that has beaten every major currency, stock index and commodity contract in 2016.

Buyers sought alternative assets this week amid the killing of Russia’s envoy to Turkey and a separate attack that left 12 people dead in Berlin. Weakening pressure on the yuan, which intensified this month as the US projected a faster pace of tightening next year following Donald Trump’s election win, is also increasing demand for bitcoin in China, where the majority of trading occurs.

“Terrorist attacks in Europe boosted haven demand in capital markets, and gold has been falling since Trump was elected,” said Le Xiaotian, an analyst at Huobi, a Chinese exchange.

“Global instability has to a large extent directed funds to the bitcoin market.”

Bitcoin, which trades in cyberspace and is mined by code-cracking computers, is gaining popularity among some investors as an alternative safe haven because it is deemed to be less influenced by government regulations and changes to monetary policy.

Gold, which tends to trade in tandem with bitcoin when haven demand is strong, has fallen this quarter as US rates rise, narrowing its premium over bitcoin to the least in three years.

“The Fed’s rate hike announcement has probably spooked a lot of emerging-market investors, particularly those in China, who are now flocking to bitcoin as a refuge from weak fiat currency assets,” said Thomas Glucksmann, head of marketing at Gatecoin in Hong Kong.

“As we’ve passed the $800 bitcoin price, a strong resistance point in the past, and move closer towards the psychological $1,000 stratosphere, anything seems possible.”

1 How can I view my dead brother’s will if I’m not the executor?
2 Michel Barnier rejects UK’s call for Canada-style trade deal
3 Applications for 961 new homes in Dublin and Meath rejected
4 Barry’s Hotel at €8m comes with potential to double in size
5 Walmart disappoints with weak sales volumes over Christmas
Real news has value SUBSCRIBE