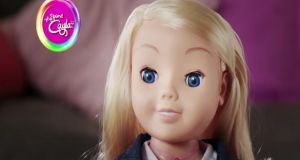 ‘My Friend Cayla’. US campaigners have lodged complaints over the doll that connects via an app to the internet.

Parents have been urged by the State’s data watchdog to think twice about purchasing toys that are connected to the internet, as the toys may record “potentially sensitive” information.

The Data Protection Commissioner said the toys, especially dolls, may give the appearance of having a personality and human-like qualities, something which may appeal to children.

However, privacy campaign groups in the US have filed complaints with the US consumer regulator in relation to a number of such toys, due to the fact they record children’s voices.

Some toy stores across Europe have already removed one of the toys - a doll called My Friend Cayla - from their shelves and have offered refunds to parents who purchased the doll following the revelation.

It remains on sale on some websites, including at least one Irish-based site.

The commissioner’s office said the European Consumer Council had contacted data protection authorities across Europe regarding possible data protection issues that might occur when children and parents use toys with microphones and cameras that have an ability to connect to the internet.

“In some instances, the toys can recognise words and react in certain ways which suggest an emotional response to what the child says or does.

“Some toys also connect to apps on smartphones or tablets,” the commissioner said, in a guidance note.

“This might allow for the collection and recording of ‘conversations’ between the doll and the child, or even act as a ‘walkie-talkie’.

“For some of these products, the voice recordings are shared with other companies, and the toys’ terms and conditions may allow for your child’s conversations to be used as the basis for targeted advertising.

“Any interactions your child might have with these kinds of toys is a potentially sensitive matter,” the commissioner said.

The office said parents who were considering buying toys for Christmas “may wish to take extra care when selecting any electronic toy that has a camera or voice-recording ability, connects to the internet or allows remote connection using a smartphone or tablet app”.

It said that things to look out for include what kind of sensors the doll comes with and whether they can be switched off, as well as whether the toy connects via Bluetooth.

“For instance, would it record your child’s voice, understand certain words or phrases, take photographs, or allow video to be captured,” the commissioner’s note said.

Parents were urged to examine privacy policies on related apps and websites to establish whether their child’s information was being shared and, if so, whether it was possible to request that this information be deleted.

“If you find that the answers to these questions cannot be found or that you are not happy with them, then our advice to you is to think twice about purchasing the toy,” the commissioner said.

“If you are happy to buy the toy for your child, then take care to ensure that it is working in the way described, and that you are happy with what it is doing, especially when it shares information with an app or with companies or websites it might connect to.”

In the US, a coalition of groups filed a complaint with the federal trade commission earlier this month in relation to the My Friend Cayla doll and the i-Que Robot toys.

They allege the toys violate laws in the US and overseas by collecting children’s voice data without obtaining consent.

1 Bank leaked my loan request to family who tried to rip me off
2 Solar panels: How do they work - and are they worth it?
3 Ryanair and Aer Lingus monitor impact of coronavirus on travel to Italy
4 Over $12m from sale of Walford handed over in Sean Dunne bankruptcy case
5 Mastercard to create 1,200 new jobs by expanding base in Dublin
Real news has value SUBSCRIBE