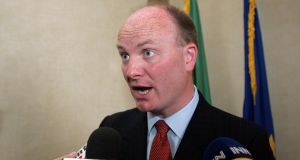 A senior Mexican government official has vowed to sue Galway businessman Declan Ganley for defamation in the US.

She has also rejected allegations of corruption made under oath by a senior Deloitte executive, concerning Mexico’s $7 billion Red Compartida tender for a state-backed mobile network.

Mr Ganley’s Rivada Networks was excluded from bidding for Red Compartida last month, and it was awarded to its only remaining rival, the locally-led Altan consortium. Rivada alleges this was a “stitch up”. Altan has denied wrongdoing.

Deloitte Consulting was an adviser to the Mexican department of telecommunications, the SCT, ahead of the process. Brett Haan, lead Deloitte partner on the contract, gave sworn testimony in the US on Tuesday, after Rivada obtained a court order to compel him. He alleged corruption within SCT.

Monica Aspe, the deputy secretary at the SCT who oversaw Red Compartida, told The Irish Times Mexico will sue Mr Ganley personally in the US over his “false” allegations, which she rejected.

She also rejected Mr Haan’s sworn allegations, which included that he met her to discuss evidence SCT officials were paid off by subcontractors.

When asked if she remembered this meeting, she said: “I don’t remember it happening like that.” She declined to share her recollection.

While under oath, Mr Haan alleged an SCT official, Mario Gongora, asked him to rig the process in favour of CVG, a Mexican company that later became a founding member of Altan.

Mr Haan testified that he told Mr Gongora that this would be “illegal”.

“He does not know Mexican law,” said Ms Aspe of Mr Haan, who was effectively her adviser. She also said Mr Gongora no longer worked at SCT.

She acknowledged CVG tried to get Red Compartida awarded without a tender, ahead of the tendering process, but that this was within Mexican rules.

Mr Haan testified that Richard Keith, a colleague who worked advising SCT on behalf of Deloitte and, later, for Bank of America, told him one of the bids was a “photocopy” of a supposedly secret evaluation document prepared by Deloitte.

Rivada has alleged in US court documents that this bid was Altan’s.

Ms Aspe said this document prepared by Deloitte “contained no confidential information” on the tender. She said it was not part of the tendering process, but it was preliminary: “Brett Haan was not here [for the tender]. He has no information on the process.”

The supposedly secret document was described by Mr Haan as a business plan. When asked if, regardless of whether or not it formed part of the tender, it had been shared with Altan, she said “not by us”.

Ms Aspe said Rivada was disqualified from bidding because it missed the deadline to file a $50 million cash-backed bond: “This is not a small thing.”

Rivada rejects this, and said it sufficiently met Mexican rules by this deadline, and supplied the full bond shortly afterwards.

Ms Aspe said she was “in awe” of the legal and media campaign mounted by Rivada after its disqualification, but insisted it had “not complied” with the rules.

When asked if she was confident there had been no corruption in the awarding of Red Compartida, she said there was “full transparency” and all rules were followed while she was in charge.

She said Mr Haan’s deposition and Rivada’s allegations have been forwarded to the “internal controller” of SCT. Rivada is suing in Mexico to be readmitted to the process. The final contract is due to be signed by Altan “anytime before January 27th,” she said, most like in the second half of January.