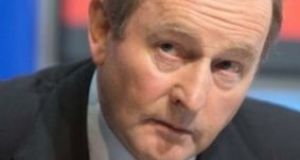 Taoiseach Enda Kenny: Isme said 2017 presents a new opportunity for the Government, and urged it to do more to help reduce costs

Irish Ministers may pitch the country as a great place to do business, but when it comes to small and medium enterprises, satisfaction with the Government is continuing to slip.

According to the latest edition of the Government Satisfaction Survey carried out by the Irish Small & Medium Enterprises Association (Isme), tackling business costs and the handling of the banking situation are continuing to sour the view small firms have of authorities. It has been a slow decline over the year, the fourth quarter in a row that satisfaction has fallen.

The headline figure showed satisfaction fell 10 per cent from the previous quarter, declining from -16 per cent to -26 per cent. That discontent was across the board, with enterprises of all sizes seeing a decline.

Among industries, the manufacturing sector has seen the biggest decline, falling from -17 per cent in the third quarter to -39 per cent. At the other end of the scale was construction, which at 1 per cent is the most satisfied industry.

The rating of the Government’s handling of the jobs situation also declined, but was the only part of the survey to remain in positive territory at 2 per cent. Small businesses were least satisfied with how the Government was handling things.

Business costs, meanwhile, are still a problem, with satisfaction rating at -67 per cent. That was most pronounced in manufacturing and distribution, which was at a record level of -79 per cent and -76 per cent. The services sector recorded a -51 per cent rating.

Isme chief executive Neil McDonnell said 2017 presents a new opportunity for the Government, and urged it to do more to help reduce costs.

“The results for the final quarter of 2016 show a mixed bag. Brexit, economic uncertainty, access to finance, high businesses costs and the cost of living have made it a tricky year for SMEs.”

The survey spoke to almost 1,000 SME respondents in the first week of December to gauge sentiment.

1 In six months we will be in the grip of a 1980s-style recession
2 Angela Merkel sweeps in to save the euro zone
3 Property price drop of up to 12% this year a ‘reasonable’ assumption – McDonagh
4 Chartered Land moves closer to approval for Dublin’s tallest tower
5 Donohoe warns of cost of pandemic as budget deficit swells to €6.1 billion in May
Real news has value SUBSCRIBE