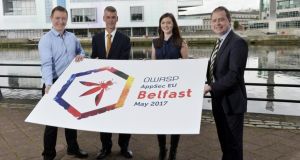 Belfast is set to deliver the definitive master class in how “not to get hacked” next week when the city hosts two major cyber security conferences which will include insights from a former spy agency boss, some of the world’s top online security entrepreneurs and international professional hackers.

The CSIT cyber security summit is an annual event which brings a host of industry leaders, government policymakers, start-ups and respected researchers together under one roof in Belfast to tackle the most pressing cyber security challenges.

David Crozier, CSIT head of strategic partnerships and engagement, said this year’s theme – “Security for a future digital society – is one with which everyone can identify.

“It doesn’t matter who you are or what you do – whether you are a small firm or a large business or simply on a personal level – online security is an issue for everyone these days,” he said.

This year’s CSIT summit will specifically focus on “planning today for the cyber security challenges of tomorrow” and Mr Crozier believes it will help showcase why Belfast is fast cementing its position as a major European hub for cyber security firms.

It is estimated that the overall UK cyber security industry is worth more than £22 billion (€26 billion) a year to the UK economy and is currently growing at around 10 per year.

Conrad Prince, the UK cyber ambassador who was formerly the deputy head of GCHQ, the UK signals intelligence and cyber security agency, is one of the key speakers this year at the CSIT summit and is likely to highlight that the UK’s cyber security global export market is worth an estimated £33 billion.

Gary Robinson, co-founder of OWASP Belfast, believes this presents a major opportunity for Northern Ireland – both for home-grown talent and for new investors.

Mr Robinson, who founded cyber security start-up Uleska, says AppSec Europe will be one of the biggest European cyber security conferences in 2017 and will help sell what the North has to offer.

“Northern Ireland tops the rankings for US foreign direct investment in cyber and the strength of the cyber cluster that is developing here has started to be recognised in the wider industry.

“Other cities have larger tech industries but if we in Northern Ireland concentrate our focus on cyber security there’s no reason not to believe Belfast’s enviable talent pool and the blend of local and global companies can make it the cyber security capital of Europe,” Mr Robinson said.