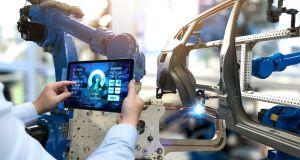 An automated robot arm being used in a factory. Photograph: Getty Images/iStock

Automation or technological advancements must not undermine jobs or public services, the trade union Fórsa has warned.

It also said that citizens did not want to talk to machines.

The head of the union’s Civil Service division Derek Mullen told its conference in Kilkenny that while it would not oppose the introduction of new technologies such as artificial intelligence, technological advancement should not come at the cost of jobs or services.

He said civil and public service management “should work with unions to ensure that the introduction of new technologies does not lead to job losses or poorer services”.

Mr Mullan said there had been a “positive experience” in Revenue, “where new forms of work organisation, supported by retraining, had increased the tax take and improved audit and fraud control rather than cutting jobs”.

Mr Mullan told 400 delegates at the conference that Fórsa would not give blanket support to the replacement of people-provided services with artificial intelligence.

“We will support properly thought-out automation, controlled by workers and managers whose aim will be the continued enhancement and delivery of public services. Citizens do not want to talk to machines,” he said.

He said that in a submission presented to the Department of Public Expenditure and Reform earlier this year, Fórsa had argued steps should be taken to ensure new recruits in the public service “were equipped to thrive in increasingly-automated work environments, and that older workers should get help to adapt”.

The paper also argued against an expensive external consultant-led approach to technological development.

“The diminution of in-house IT services over the last two decades has seen the growth of a hugely costly consultant-led approach to designing new systems. This must change,”the union said .

The submission was written as part of the union’s response to Civil Service management proposals for procurement of new technologies, on foot of an automation pilot that had been underway in a small number of civil service departments over the last year.

Mr Mullen told delegates that Fórsa would continue to champion the delivery of world class civil and public services but wanted more involvement in relation to change and reform plans.

“The world of work will change, as will society, and we must ensure that this is achieved equitably, and that decent work is protected in all parts of the economy, including in the civil service,” he said.

He maintained that considerable change was ongoing in the Civil Service .

“We continue to support positive change but, at the same time, we demand more involvement and negotiation on change initiatives. We won’t be found wanting, but we won’t accept poor planning and we categorically reject outsourcing as a solution. Just look at the costs to taxpayers of the failed JobPath scheme in social protection,” he said.

1 Aldi to impose limits as Christmas toys go on sale
2 Irish house prices could buck European trend and fall this year, says S&P
3 Fair deal? Family at odds with hospital and each other not so sure
4 Irish elearning company LearnUpon closes €47.4 million investment
5 First look: Is the iPhone 12 Pro the best smartphone out there?
Real news has value SUBSCRIBE