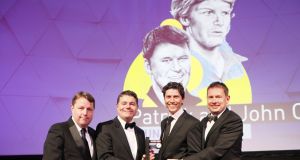 Stripe founders Patrick and John Collison have won the Business Person of the Year Awards at a ceremony held at Dublin’s Mansion House this evening.

The Limerick-born brothers won the award for their success in building an online payments company that was recently valued at $22.5 billion.

“We’re very honoured to accept the award on behalf of all the people working at Stripe,” said John Collison, the company’s president.

Stripe, which was founded in San Francisco in 2009, handles billions of dollars in transactions each year. The company has had a busy year to date, announcing a $100 million follow-on funding round, the appointment of another tech titan to its board, and the acquisition of Irish start-up Touchtech Payments.

In addition, Stripe also recently confirmed plans to create hundreds of extra jobs in Dublin to coincide with it securing an e-money licence from the Central Bank.

Stripe builds software and payment infrastructure that helps businesses accept money online and across borders. While it started off securing relatively small clients it now counts the likes of Amazon, Uber, Booking. com, Deliveroo and Google among its customers.

Although Stripe has recorded phenomenal growth since it was established, the company’s founders insist it has barely begun to take advantage of the opportunities open to it given that only about 3 per cent of global commerce currently happens online.

At ages 30 and 28 respectively, Patrick and John Collison are among the world’s youngest billionaires.

Patrick, the company’s chief executive, said Stripe now has 1,800 employees with more than 300 expected to be employed at its Irish operations by the end of this year.

“There is lots more we plan on doing out of Dublin in the years ahead. We are going to be investing a lot,” he said.

Stripe was also shortlisted for company of the year, which this year was won by Dublin-listed Dalata.

1 Basic income for all: Has the Covid crisis given us a new economic model?
2 ‘I don’t need to do any of this. . .I don’t actually need to work.’
3 Only way is up for Stripe as valuation skyrockets
4 Anti-alcohol zeal of public health experts peppers reopening debate
5 AIB revives €1bn-plus problem mortgages sale
Real news has value SUBSCRIBE