Government will not own broadband network when built 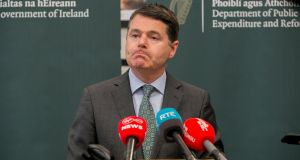 Minister for Finance Paschal Donohoe speaks to media on the National Broadband Plan at the Department of Public Expenditure and Reform, Dublin. Photograph: Gareth Chaney Collins

The total cost of the National Broadband Plan (NBP), including private investment, is now expected to exceed €5 billion.

Despite paying the bulk of the cost – €3 billion – the Government will not own the network once it is built. Typically in public-private partnerships, the asset reverts to the State after the contract runs out.

“When taking the overall cost of this into account before revenues, the estimated total project cost is estimated to be circa €5 billion, exclusive of VAT, over the first 25 years,” a spokesman from the Department of Communications confirmed to The Irish Times yesterday.

The €5 billion figure implies the preferred bidder – the consortium led by US businessman David McCourt – is investing €2 billion in the project.

In an interview last year, Mr McCourt said his consortium was planning to invest only €1.1 billion – €600 million of which would be bank debt. However, that was before his final-stage negotiations with Government.

The plan, first announced as far back as 2012, has been beset by delays and setbacks and largely shunned by the industry here.

Telecoms firms Eir and Siro had been favourites to win the State contract but resigned from the bidding process, citing difficulties with the tender and the overall viability of the project.

On Tuesday, the Cabinet approved the plan and the McCourt consortium as preferred bidder despite concerns about the cost and likely take-up of the scheme from several quarters including its own officials.

In one letter, Department of Public Expenditure officials, including Secretary General Robert Watt, warned the Cabinet a number of projects could be delayed as a result of extra capital money being spent on broadband.

These included more than 2,000 social housing units, 18 primary schools and up to 10 primary healthcare centres.

“Government has made a decision regarding the NBP procurement and it has now been determined that the maximum possible cost to the State will be €3 billion to build, operate and maintain the network over 25 years,” the spokesman said.

“This includes €545 million for conditional and contingent subsidy and includes €354 million in VAT, which will be paid to the Revenue Commissioners as subsidy is spent,” he said.

The Government’s NBP plan involves the laying of up to 140,000km of fibre-optic cable through remote and, in some cases, difficult terrain.

More than 80 per cent of the 540,000 homes and businesses covered by the plan are located outside villages, a legacy of Ireland’s loose planning laws.

However, the Government’s contract includes a number of “clawback clauses” should the cost of the rollout come down in price or the project prove more profitable.

While the McCourt consortium was being unveiled as preferred bidder, the contract has not yet been signed and this is not expected to happen until later this year.

The first homes earmarked for the service under the plan are not expected to be connected until the beginning of next year while the last ones may have to wait until 2026.