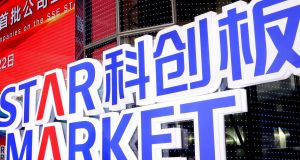 Shares rocketed by as much as 520 per cent on the first day of trading for Shanghai’s new science and technology-focused equities market, as investors scrambled to buy the first 25 companies to list on the so-called Star Market, leaving other Chinese equities high and dry.

All of the first batch of 25 companies – ranging from chip-makers to biotech firms – more than doubled their already frothy IPO (initial public offering) prices on the Star Market, operated by the Shanghai Stock Exchange.

Trading in Anji Microelectronics Technology (Shanghai), a semiconductor firm, was halted twice as the company’s shares hit two circuit breakers – first after rising 30 per cent, then after climbing 60 per cent from the market open – designed to calm frenzied buying.

Unlike China’s other boards, the so-called Star high-tech board has no daily trading limits in place for the first five days of trading. The trading suspension mechanism is intended to allow the market to cool off and reduce irrational speculation, according to the securities regulator.

By the midday break, Anji shares had leapt 415 per cent from their IPO price, having been up 520 per cent at one stage. Suzhou Harmontronics Automation Technology, however, triggered its circuit breaker in the opposite direction, falling 30 per cent from the market open, before rebounding.

But by midday the company’s shares were still 113 per cent higher than their IPO price. Monday’s spiralling share prices and high volatility on the Star Market were anticipated as investors chased the new board, said Zhu Junchun, chief analyst with Lianxun Securities.

Investor focus on the Star Market in the short term could weigh on the main board in terms of liquidity and attention, he said. That effect was clear on Monday, with the benchmark Shanghai Composite Index dipping 0.57 per cent by midday, and the blue-chip CSI300 index trading flat. SSE said an index tracking the Star Market would be launched on the 11th trading day following the debut of the 30th company on the board.

Modelled after Nasdaq, and complete with a US-style IPO system, Star may be China’s boldest attempt at capital market reforms yet. It is also been driven by Beijing’s ambition to become technologically self-reliant as a prolonged trade war with Washington catches Chinese tech firms in the crossfire. Even veterans of China’s notoriously volatile stock markets had braced for a wild opening day on the new board, after initial public offerings were oversubscribed by an average of about 1,700 times among retail investors. – Reuters