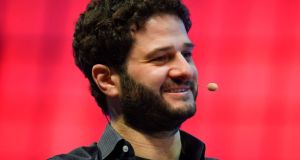 Asana, a technology company set up by Facebook co-founder Dustin Moskovitz, is looking to aggressively grow staff numbers in the Republic after almost doubling headcount here over the past year.

The company this week relocated its European, Middle East and African (EMEA) headquarters to new premises in Dublin that has space to accommodate about 60 people. However, Mr Moskovitz told The Irish Times that Asana was already on the lookout for additional office space in the capital as it looks to continually increase employee numbers on the back of international growth.

Staff numbers at Asana’s Irish operations have jumped from 17 to 30 over the past 12 months, but Mark Zuckerberg’s former college roommate predicted the company would need even more space shortly.

Mr Moskovitz was speaking as new figures showed Asana now has 50,000 paying organisations, up from 20,000 18 months ago and in addition to the more than one million other businesses that use a free version of the company’s productivity management software.

Asana’s software, which lets organisations set and track projects and other tasks, is used by big names such as Disney, NBCUniversal, Procter & Gamble, Indeed, Lionsgate, Samsung and Vox Media.

Mr Moskovitz said the company had recorded sales growth for six consecutive quarters with revenue growth rate up about 90 per cent year on year.

He added that half of the company’s revenues come from outside of the US, with Europe being a key market, hence the importance of the Irish operation.

“EMEA is where we are seeing the bulk of growth currently, partly because that is where a lot of our focus is, but also because of productivity and digital transformation initiatives in European markets,” he said.

The San Francisco-headquartered company was established in 2008 by Mr Moskovitz and Justin Rosenstein, who famously created Facebook’s ‘like’ button.

Mr Moskovitz was a roommate of Mr Zuckerberg at Harvard and co-founded Facebook with him in 2004. Now aged 34, he was named by Forbes as the youngest self-made billionaire in history in 2011 due to his 2.34 per cent share in the social media giant, which floated the following year.

Overall, the company has raised more than $160 million.