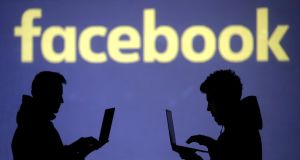 Facebook, Google and other tech companies have agreed a code of conduct to do more to tackle the spread of fake news. Photograph: Dado Ruvic/Reuters

Facebook, Google and other tech companies have agreed a code of conduct to do more to tackle the spread of fake news, due to concerns it can influence elections, the European Commission said on Wednesday.

Intended to stave off more heavy-handed legislation, the voluntary code covers closer scrutiny of advertising on accounts and websites where fake news appears, and working with fact checkers to filter it out, the Commission said.

But a group of media advisors criticised the companies, also including Twitter and lobby groups for the advertising industry, for failing to present more concrete measures.

With EU parliamentary elections scheduled for May, Brussels is anxious to address the threat of foreign interference during campaigning. Belgium, Denmark, Estonia, Finland, Greece, Poland, Portugal and Ukraine are also all due to hold national elections next year.

Russia has faced allegations - which it denies - of disseminating false information to influence the US presidential election and Britain’s referendum on European Union membership in 2016, as well as Germany’s national election last year.

The Commission told the companies in April to draft a code of practice, or face regulatory action over what it said was their failure to do enough to remove misleading or illegal content.

European digital commissioner Mariya Gabriel said on Wednesday that Facebook, Google, Twitter, Mozilla and advertising groups - which she did not name - had responded with several measures.

“The industry is committing to a wide range of actions, from transparency in political advertising to the closure of fake accounts and ...we welcome this,” she said in a statement.

The steps also include rejecting payment from sites that spread fake news, helping users understand why they have been targeted by specific ads, and distinguishing ads from editorial content.

But the advisory group criticised the code, saying the companies had not offered measurable objectives to monitor its implementation.

“The platforms, despite their best efforts, have not been able to deliver a code of practice within the accepted meaning of effective and accountable self-regulation,” the group said, giving no further details.

Its members include the Association of Commercial Television in Europe, the European Broadcasting Union, the European Federation of Journalists and International Fact-Checking Network, and several academics. – Reuters