Margrethe Vestager to hit Google with another fine 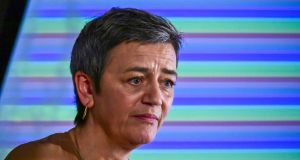 The European Commission is set to fine Google for hampering potential rival search advertisers, in the latest antitrust showdown between the EU and the US tech giant.

Following a high-profile investigation, Margrethe Vestager, the EU competition commissioner, will announce the fine next week, according to three people familiar with the case.

Google has already paid €7 billion in EU penalties to date for two other cases. The search giant was fined a record €4.3 billion last year for abusing the dominant market position of its Android operating system for smartphones, and was hit with a €2.4 billion penalty the prior summer for favouring its own shopping services over competitors. Google is appealing both decisions to the European courts in Luxembourg.

The latest investigation has focused on Google’s AdSense business, which places its search box on third-party websites, such as news websites. The commission can fine up to an additional $13 billion – which is 10 per cent of the latest global turnover of Google’s parent company, Alphabet – but the penalty is expected to be significantly smaller than the maximum.

As outlined in their 2016 charge sheet, EU officials worried that Google “artificially reduced choice and stifled innovation in the market” by contractually restricting how third-party websites display search ads from rivals.

The EU case centres on Google demands, introduced in 2006, that required a number of popular third-party websites to use its ad service exclusively if they wanted to include the Google search box on their site. In 2009, the company relaxed the restrictions to allow the websites to show competing advertisers on their pages, but required they display a minimum number of Google ads in prime locations and give Google the right to authorise changes to competitors’ ads. The contract terms were ultimately phased out from 2016.

While next week’s fine will bring an end to the AdSense investigation, EU antitrust officials continue to scrutinise Google’s behaviour in other services – such as dedicated search for travel, jobs and local businesses – and could open fresh probes. They are also still considering if the fixes to Google’s Android operating system and shopping services are sufficient.

Ms Vestager said in an interview last month that EU officials were doing “very preliminary” work on Google’s job and local business search services as “some of those businesses that depend on the large platform, they feel that they are being unfairly treated... [the complaints] they just keep coming in”. – Copyright The Financial Times Limited 2019

1 In this strangest of recessions, what happens next for Ireland?
2 Estée Lauder staff at Dublin airport plan further strike action
3 Boohoo review finds ‘many failings’ in Leicester supply chain
4 Overhaul of lease arbitration regime would be a game changer for retailers
5 Best Covid-19 ‘influencers’ will avoid hectoring
Real news has value SUBSCRIBE