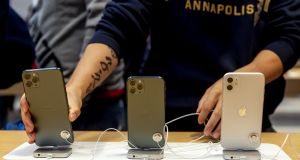 Apple iPhones are displayed at a store on Fifth Avenue in New York. Photograph: Mark Abramson/Bloomberg

Apple has said it intends to ease some restrictions on developers of third-party apps.

The Cupertino, California-based company plans to release a software update later this year that will help outside messaging applications work better with the Siri digital assistant.

Right now, when iPhone users ask Siri to call or message a friend, the system defaults to Apple’s Phone or iMessage apps. If you want to use WhatsApp or Skype, you have to specifically say that.

When the software refresh kicks in, Siri will default to the apps that people use frequently to communicate with their contacts. For example, if an iPhone user always messages another person via WhatsApp, Siri will automatically launch WhatsApp, rather than iMessage. It will decide which service to use based on interactions with specific contacts. Developers will need to enable the new Siri functionality in their apps. This will be expanded later to phone apps for calls as well.

Apple is facing more scrutiny over the power of its App Store and how the company both supports and competes against developers. The iPhone has a growing roster of Apple apps pre-installed and set as defaults, making it more difficult for some third-party apps to reach consumers, Bloomberg News reported on Wednesday. A House antitrust panel recently asked the company about this policy.

Apple-made apps that are pre-installed on iPhones represent only 0.00002 per cent of the roughly 2 million apps in the App Store, the company also noted. A recent feature that highlights interesting apps for consumers, called App Store Stories, has exclusively promoted Apple’s own software only 1 per cent of the time, according to the company.

The company also said it gives developers access to hundreds of millions of consumers in 155 countries without the need to invest time and money to distribute their apps. It offers developers free marketing in the App Store and on social media, gives personalised recommendations to users who might be interested in their apps, and provides advice from the Apple developer-relations team.