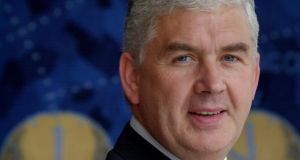 Former interim chief executive of Eircom Cathal Magee has lodged a case against the company now trading as Eir in the High Court. Photograph: Bryan O’Brien

Cathal Magee, the former interim chief executive of Eircom (now called Eir), plans to sue the company in a row over payment of a €150,000-a-year consultancy package he agreed with the company upon his exit in 2010.

Mr Magee, who was appointed as chief executive of the Health Service Executive after leaving Eircom, has lodged a case against Eircom in the High Court, although the company has yet to be served legal papers. He has retained the services of top employment lawyer, Donal Spring, to represent him in the dispute.

Mr Magee was a 15-year veteran of Eircom, serving in a range of senior executive roles including head of its retail arm, before he was elevated to the post of interim chief executive in 2009.

He served in the top job for six months, initiating a major cost-cutting programme, before he lost out to Paul Donovan in the race for the role full-time.

He subsequently left Eircom in January 2010. As part of his exit package, he struck an agreement with the company for €150,000 per year for several years for consultancy services.

In May of 2010, it was announced that Mr Magee was to be appointed to head up the State’s health services. It is understood that after further discussions with Eircom, it was decided that the €150,000 for the first year of his consultancy arrangement would be paid out in August 2010, before he officially took up the HSE post the following month.

The rest of the payments due to him under the arrangement were to be deferred until after finished his contract with the State at the HSE.

Mr Magee established a company, CMJ Consulting & Management Services, to handle the payments due under his arrangement with Eircom. Its accounts for the 12 months between July 2010 and June 2011 show it received a cash payment of €150,000, which yielded a €127,850 profit after tax and other costs.

The following year, until the end of June 2012, CMJ’s accounts do not record any further cash payments from Eircom, or that any were owed. In the summer of 2012, Mr Magee then resigned from his role at the HSE.

It is understood a dispute arose at around this stage between Mr Magee and Eircom, by now under new ownership, over the payment of his €150,000-a-year consultancy deal. He has now initiated legal action.

Eircom, now trading as Eir, has since changed hands again, and is now controlled by a consortium led by French telecoms tycoon, Xavier Niel. The company declined to comment this week, as it had not been served legal papers. Representatives of Mr Magee also declined to comment on his legal action.