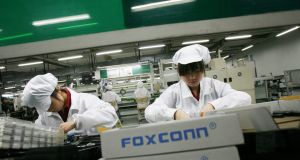 Employees work inside a Foxconn factory in the township of Longhua in the southern Guangdong province of China. Photograph: Reuters

Apple has admitted that too many temporary workers were used in the run-up to the launch of its latest iPhones, following a report into labour violations at a Foxconn factory complex known as “iPhone City”.

The revelation of labour violations came a day before Apple was expected to unveil three new iPhones.

More than half the workers at the 1.4 million square metre plant in Zhengzhou were temporary workers in 2018, falling to about 50 per cent in August 2019, according to a report called “iPhone 11 illegally produced in China”, produced by China Labour Watch, a workers’ rights group.

Using workers on short-term contracts is a common way for factories to meet periods of peak demand without taking on longer-term costs, but Chinese labour law states that no more than 10 per cent of a work force can be temporary.

Apple said: “We did find during our investigation that the percentage of dispatch workers exceeded our standards and we are working closely with Foxconn to resolve this issue.”

Apple’s supplier code of conduct states that all use of temporary and outsourced labour “shall be within the limit of the local law”.

Apple has been criticised repeatedly for working practices in its vast supply chain in China. Late last year it launched an investigation after Sacom, another human rights group, alleged a supplier was illegally employing students to assemble Apple Watches in the Chinese city of Chongqing.

“Foxconn is saving money by hiring dispatch workers,” the latest report said. “If the factory were to simply increase wages to attract more workers during peak season, they would have to increase the wages of every worker in the factory.”

Apple dismissed other criticisms raised in the report. “We looked into the claims by China Labour Watch and most of the allegations are false,” the company said.

“We have confirmed all workers are being compensated appropriately, including any overtime wages and bonuses, all overtime work was voluntary and there was no evidence of forced labour.”

Foxconn likewise admitted that a recent review in Zhengzhou “did identify some workforce compliance issues. As soon as we received the results of that review, we immediately began a detailed process to ensure that all issues were addressed”.

It added: “We did find evidence that the use of dispatch workers and the number of hours of overtime work carried out by employees, which we have confirmed was always voluntary, was not consistent with company guidelines.”

China Labour Watch has previously identified illegal use of students working overtime in Foxconn Zhengzhou, again in a bid to meet peaks in demand.

Apple said at the time that it had identified “instances of student interns working overtime at a supplier facility in China”. It added: “We’ve confirmed the students worked voluntarily, were compensated and provided benefits, but they should not have been allowed to work overtime.”

This time China Labour Watch said the base wage for all workers of 2,100 renminbi (€234.88) was “insufficient to sustain the livelihood for a family living in Zhengzhou city”.

Social insurance contributions for all, despite being lifted from 2015 to 2018, still fall short of legal requirements, it added.