Revenues rise to € 2.48bn in 2019, more than double what they were two years earlier 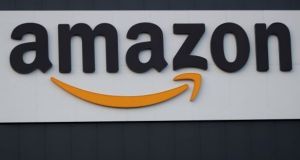 Revenues at the main Irish arm of online giant Amazon have more than doubled over the last two years as the subsidiary recorded pretax profits of €39.7 million.

ADSIL, which provides data hosting services to other group businesses, paid corporation tax of €11.7 million, on a par to what it shelled out a year earlier.

Administrative expenses rose to €2.4 billion from €1.6 billion a year earlier, the accounts show.

Close to 300 new employees joined the company last year pushing up total headcount at the Irish operation to 1,575 from 1,277. The increase in employee numbers led to a jump in staff costs, which rose to €195 million form €151 million in the prior year.

The accounts reveal the subsidiary has financial commitments of nearly €125 million relating to properties.

Amazon recently received planning permission for a €350 million 28,573 sq ft data centre in Drogheda. It is one of a number of such data centres the company has in or close to Dublin. This also includes a €1 billion centre in Mulhuddart.

A second Irish unit, Amazon Ireland Support Services Limited, which employs more than 1,100 people locally, recorded a €4.2 million loss last year, up from a loss of €3.5 million a year earlier.

1 If international visitors are pariahs should we not be testing them on arrival?
2 Varadkar to meet banks in row over interest on mortgage payment breaks
3 Belgium helps Ireland to a Brexit boon
4 WeWork on track for profits and positive cash flow in 2021, says chairman
5 Can Grafton Street stop the flood of closures?
Real news has value SUBSCRIBE