US takes aim at digital services taxes in EU 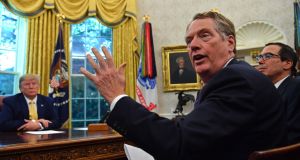 The Trump administration has announced an investigation into a string of countries that are adopting digital services taxes, including the EU, UK, Italy, Brazil, and Indonesia, which could lead to new punitive tariffs by Washington and exacerbate global trade tensions.

The move, unveiled on Tuesday by Robert Lighthizer, the US trade representative, highlighted the administration’s growing anxiety that the largest US technology companies could face higher tax bills abroad as governments seek to boost revenues in the midst of the coronavirus pandemic.

The US investigated France last year for its digital services tax plans and threatened to impose tariffs on the country’s wines, leading to a series of tense exchanges over months between the two capitals. Washington said it was now expanding the investigation to Austria, Brazil, the Czech Republic, the EU, India, Indonesia, Italy, Spain, Turkey and the UK.

“President Trump is concerned that many of our trading partners are adopting tax schemes designed to unfairly target our companies,” Mr Lighthizer said. “We are prepared to take all appropriate action to defend our businesses and workers against any such discrimination.”

US trade officials are launching the probe as a so-called section 301 investigation, which was the same process used in its trade war with China and can result in the imposition of punitive tariffs on countries that are deemed to be engaging in unfair trade practices damaging to American interests.

The inclusion of the UK comes as Washington begins talks with London over a new free trade agreement as Britain leaves the EU.

The UK has pressed ahead with a digital services tax focused on US tech groups despite threats of retaliation, saying it hopes to raise almost £500m a year from the policy, which took effect on April 1.

In January the Trump administration threatened to impose tariffs on British car exports if the UK went ahead with its tax.

The US and France paused their battle over digital taxation in January, instead agreeing to wait for talks on a multilateral taxation framework overseen by the OECD to play out over the course of the year.

As part of that pause, France agreed to stop collecting its digital tax, while the US suspended planned tariffs on French goods and dropped its insistence that any international taxation agreement should be optional.

“Actions taken by OECD member states to enact digital services taxes are contrary to the organisation’s goals and are counter to the OECD process,” Mr Grassley and Mr Wyden wrote. “We support USTR’s use of the section 301 investigation process to examine these discriminatory unilateral measures.” – Copyright The Financial Times Limited 2020