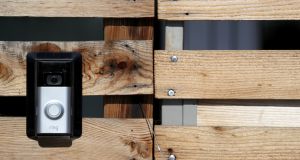 Ring’s doorbell features a camera that allows owners to see who has arrived at their porch from their mobile phone. Photograph: EPA

Amazon has agreed to purchase Ring, a maker of internet-connected doorbells and security cameras, as it accelerates its Alexa-powered push into the “smart home”.

The online retailer is trying to consolidate the stronghold created by the popularity of its Echo smart speakers and its Alexa virtual assistant by launching an array of connected devices and services, including home security monitoring with its Cloud Cam and in-home deliveries via Amazon Key service.

Amazon is paying around $1 billion (€800 million) for Ring, according to a person with knowledge of the deal, making it one of the Seattle-based company’s largest acquisitions.

Before its $13.7 billion takeover of Whole Foods, Amazon had spent around $1.2 billion on Zappos, the online shoe retailer, $1 billion for Twitch, a live-streaming site for video games, and about $800 million for Kiva Systems, whose robots are used in its warehouses.

“Ring’s home security products and services have delighted customers since day one,” said Amazon. “We’re excited to work with this talented team and help them in their mission to keep homes safe and secure.”

Ring bills itself as the “caller ID of the front door”. Its doorbell includes a camera that allows owners to see who has arrived at their porch from their mobile phone, computer or even Echo device.

Chief executive Jamie Siminoff pitched his idea - founded under the name Doorbot in 2012 - on Shark Tank in 2013. But after failing to raise money on the US reality TV show, he went on to receive more than $200 million in total investment from backers including Sir Richard Branson’s Virgin Group, Fitbit backers True Ventures, Kleiner Perkins Caufield & Byers, and Amazon’s Alexa fund.

Ring has become one of the largest standalone companies left in the connected-home market. The Santa Monica-based company has more than 1,000 employees and more than 1 million customers, which it calls “neighbours”, spread over more than 100 countries.

“Ring is committed to our mission to reduce crime in neighbourhoods by providing effective yet affordable home security tools to our ‘neighbours’ that make a positive impact on our homes, our communities and the world,” Ring said in a statement.

“We’ll be able to achieve even more by partnering with an inventive, customer-centric company like Amazon. We look forward to being a part of the Amazon team as we work toward our vision for safer neighbourhoods.”

After Nest was acquired by Google for $3.2 billion in 2014, the smart home market has seen rapid consolidation as Apple, Amazon, Google and Samsung all try to create a central platform for managing customers’ domestic “internet of things”.

However, the market’s growth has been uneven. In the UK, telecoms operator O2 recently said that it would close its smart home offering after fewer customers than expected signed up for the monthly service plan.

After Google spun out Nest as a standalone company under its reorganisation as Alphabet, it is now absorbing the maker of connected thermostats, smoke alarms and security cameras back under its internal hardware group.

JPMorgan advised Ring on its sale to Amazon.

1 Basic income for all: Has the Covid crisis given us a new economic model?
2 ‘I don’t need to do any of this. . .I don’t actually need to work.’
3 Direct sea routes to Europe offer certainty in choppy Brexit waters
4 Promontoria barred from pursuing doctor over Ulster Bank loan
5 Admission of mistake in Oxford vaccine dose raises doubts over reliability
Real news has value SUBSCRIBE