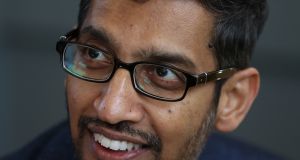 Sundar Pichai was appointed as Alphabet’s new chief executive this month after Google co-founders Larry Page and Sergey Brin stepped down as leaders of the group. Photograph: Nick Bradshaw

Alphabet’s new chief executive Sundar Pichai will receive $240 million in stock awards over the next three years if he hits all of his performance targets, as well as a $2 million annual salary beginning in 2020, the company said on Friday in a filing.

If Alphabet shares outperform the S&P 100 index, Mr Pichai could receive an additional $90 million in stock grants. It is the first time the company has bestowed performance-based stock awards.

Mr Pichai (47) was named to the top job this month after Google co-founders Larry Page and Sergey Brin stepped down as leaders of the group.

Mr Pichai received about $200 million in stock awards in 2016, which has since vested. Last year, he turned down a grant of restricted stock because he said he felt he was already paid generously, according to a person familiar with the decision.

His total compensation for 2018 was $1.9 million, according to the Bloomberg Pay Index. – Bloomberg