Amazon Echo Flex review: An inexpensive way to add Alexa to your home 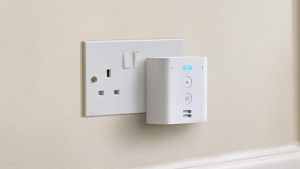 Amazon has certainly been busy building devices that make Alexa a part of our everyday lives. From speakers to ear buds, to third-party smart watches and dashcams, the digital assistant is wangling its way into every corner of our lives.

And into that comes the Echo Flex. If there was any corner of your home that was too small to shove an Echo Dot into it, the Flex will take care of that for you.

The Flex doesn’t look like much. It is more utilitarian and designed to be hidden away than the rest of the Echo range. It reminds me of a wifi plug – a little bigger than a standard plug with an occasional light or two on it. It’s a plug-in version of Alexa, with a small speaker, a USB port and a 3.5mm jack that you can use to connect the device to a speaker you already own.

That could be an important feature. While Amazon already makes the Input, which is designed to turn your regular old speaker into a smart one, the Flex can be used by itself as well as teaming up with your audio devices. You can use a stereo cable to hook up your speaker in seconds, so you can play your music through a decent speaker instead of the small tinny Echo Flex. If you are going to do that regularly though, it would make more sense just to splash out on a better Echo instead of contorting yourself with cables.

The Flex can do almost anything the Echo Dot can do, bar tell you the time (or play decent audio, as already mentioned). You can order it to turn on your lights or ask it a question such as how the weather is, add to your shopping list or buy products from Amazon if you have voice purchases enabled (recommendation: do not, unless you have no children in the house who have learned how to use Alexa for their own advantage).

Range wise, the Flex performs well. It picked up my voice from across the room, although you are more likely to use this particular version of the Echo in a smaller space such as the hallway.

Setup was simple too, with the device connecting to the Alexa app and my home wifi network in minutes. It was all relatively painless, and the Flex just integrated itself well into the smarthome setup.

The Flex also has a USB A port, so even though you lose a plug to the Echo Flex, you can use it to charge your USB devices such as smartphones or tablets. That USB port can also help expand the echo Flex’s functions, with motion sensors and night lights available from third-party suppliers.

You can mute Alexa too, the same as any regular Echo device, with a button on the front that cuts off the microphone. The LED light shows when the mic has been muted, the same as the rest of the Alexa-enabled Echo range.

The good
Inexpensive, compact and adaptable, the Echo Flex is a good option for those who want to dip their toe in to the world of smart speakers without sinking a large amount of cash into it. Plus you can make it part of a bigger smarthome setup.

The not so good
You can’t rely on the speaker for anything but audio feedback – it is small yet functional, but won’t tackle music well. The audio is a little tinny but it gets the job done. If you want a better speaker, connect one you already own, or go for the Echo Dot.

The rest
Unlike the Echo Plus or Show, there is no zigbee controller built in, so you will need hubs for your smarthome devices that require them. For the price, that is not all that surprising. The USB port means you don’t really lose a plug, and it will be useful for expanding the Flex in the future. The only accessories offered so far are third party, but it will be interesting to see what else Amazon adds.

The verdict
If you want Alexa in your home but don’t want smart speakers everywhere, this is the Echo device for you.