Web Log: Since 2007, 10 million miles of roads, paths and pavements have been captured 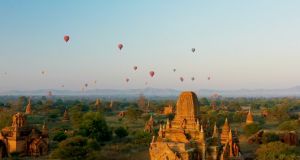 Google Earth has been mapping the globe since 2001 and Street View has provided us with a zoomed-in version of this since 2007. In this time 36 million square miles of high-definition satellite images have been used to create a view of earth that covers more than 98 per cent of the population. Additionally, Street View cars, trikes and people (using the portable Google Trekker backpack) have captured over 10 million miles of roads, paths and pavements and their environs.

In order to reach remote areas around the world, Google says that some other unusual methods of travel have been employed: sheep, camels and boats – and in one case, a group of Norwegian scouts – have all been used to bring the Trekker’s cameras to far-flung corners of the globe.

Privacy issues aside, this is an impressive feat of technology and humans working together to map the globe and make it easier to travel (and easier for large tech companies to control this valuable information but that is a topic for another day).