Former chief executive has liquidated more than $2.5bn of stock in two months 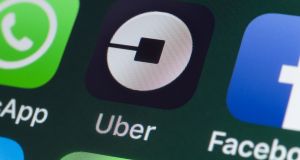 Uber founder Travis Kalanick has now sold more than 90 per cent of his shareholding at the time of the ride-hailing group’s initial public offering in May. Photograph: iStock

Travis Kalanick has sold the majority of his stake in Uber, liquidating more than $2.5 billion (€2.26 billion) worth of stock in less than two months.

Mr Kalanick, Uber’s former chief executive, has now sold more than 90 per cent of his shareholding at the time of the ride-hailing group’s initial public offering in May.

The scale and pace of his share sales has prompted speculation that Mr Kalanick could sell his entire stake in the company he co-founded before the end of the year.

That could raise questions from investors about his long-term position on the board. All of Uber’s directors will face a shareholder vote for re-election in May.

The proceeds provide Mr Kalanick with a huge war chest to finance his new venture, Los Angeles-based City Storage Systems. The start-up, better known as CloudKitchens, is scooping up real estate around the world to lease to restaurants serving food delivery apps, including Uber Eats as well as its rivals such as DoorDash and Deliveroo.

After selling about $1.4 billion (€1.2 billion) in Uber shares to SoftBank in a private transaction in early 2018, Mr Kalanick has self-financed much of CloudKitchens’ expansion around the world, including to Europe, the Middle East and Asia.

Regulatory filings this week showed that Mr Kalanick sold another $383 million (€345 million) worth of Uber stock, reducing his shareholding in Uber from almost 6 per cent at the IPO to less than 0.5 per cent today. His remaining stake is now worth about $250 million (€226 million).

Mr Kalanick, who was ousted as Uber’s chief in 2017 after a litany of scandals but still serves on the company’s board, began to cash in his shares immediately after November’s expiration of so-called “lock-up” restrictions on company insiders selling stock, after Uber’s initial public offering in May.

The rapid selling does not suggest Mr Kalanick has much confidence that Uber’s shares will rebound, despite efforts by his successor Dara Khosrowshahi to curb its losses and make peace with regulators. Uber has been trading around 33 per cent below May’s $45 IPO price since the lock-up expired.

“When insiders, current and past, sell, they normally signal bad news,” said Meziane Lasfer, professor of finance at City University’s Cass Business School. “The market is likely to follow him.”

He has been selling as part of a rule 10b5-1 plan, which arranges trades within a pre-determined timeframe and price range, rather than in response to any particular news event. Such schemes are designed to shield company insiders from any suggestion that they are trading on information that is not yet available to outside investors.

Mr Kalanick’s selling spree recalls Steve Jobs’ decision in the mid-1980s to dispose of almost all of his shares in Apple, after he was forced out by the computer maker’s board in the mid-1980s.

While Jobs’ sale deprived him and his estate of shares that would be worth tens of billions of dollars today, it did not prevent him from returning to lead Apple in the late 1990s – a move that some in Silicon Valley believe Mr Kalanick would like one day to emulate.

4 Tax relief on dining out expenses a flop