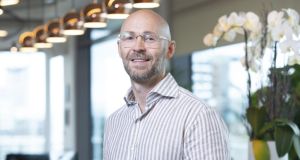 Matt Henderson, the new head of global engineering for EMEA at

He joins the company from Google, where he led its strategy for scaling the global apps and games marketplace Google Play.

Mr Henderson joined the internet giant in 2014 after the tech giant acquired Rangespan, a shopping analytics platform he co-founded in 2011.

Prior to this, he spent almost seven years at Amazon where he helped to build build and scale the company’s business in Europe, leading large teams across multiple functions including product management, account management and business development.

In addition, Mr Henderson is an angel investor, having backed about 80 start-ups including well-known tech companies such as Ripple and Wefox.

Speaking to The Irish Times, Stripe co-founder John Collison, who set up the fast-growing company with his brother Patrick in 2010, said he was delighted to have secured Mr Henderson to lead product strategy at a time when it is heavily focused on scaling in the European market.

“Matt is something of a renaissance man, having helped some of the largest and most well-known tech companies grow and as someone who has successfully built his own business. We are really lucky to get him as the person responsible for leading product and engineering efforts in Dublin,” said Mr Collison.

Mr Henderson’s appointment comes as an important time for Stripe, which has shifted focus of late towards increased market share in Europe.

The company last month rolled out its subscription billing service to Europe, having introduced it in the US a year ago. Stripe Billing is a product intended to simplify the recurring billing process by enabling businesses of all sizes to have access to enterprise-grade tools to implement subscription models quickly and at scale.

Stripe is also heavily focused on opportunities arising from strong customer authentication (SCA) compliance. This is new legislation that comes into effect in September which requires businesses to build an extra layer of authentication into online card payments.

As part of its efforts in this space Stripe has developed its own services and also recently acquired Irish fintech start-up Touchtech Payments, a company that provides advanced SCA technology for start-ups such as N26 and TransferWise, as well as more traditional financial institutions.

“Everyone is very concerned about SCA changes. We looked extensively at the space and decided Touchtech built the best software for banks to comply with it,” said Mr Collison.

He refused to rule out further acquisitions in the future but stressed that the company also remains focused on continuing to build products in-house.

Stripe, which secured an e-money licence from the Central Bank earlier this year, also recently confirmed plans to create hundreds more jobs in the Republic.

“The European market is fast changing and we think we need a really strong R&D base in Dublin to meet that,” said Mr Collison, adding that the Irish jobs market was competitive but that the company was used to hiring in such situations.

Mr Collison and his brother Patrick, who come from Limerick originally, are both due to appear on RTÉ’s The Late Late Show on Friday.