1,800 homes sign up as WiredScore rolls out build-to-rent certification

Company, which certifies buildings in terms of internet connectivity, expands in Dublin 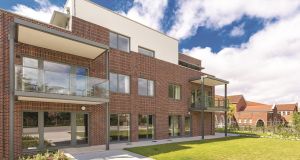 The Fernbank scheme in Churchtown, which is currently undergoing WiredScore Home certification

WiredScore, a company that rates and certifies buildings in terms of internet connectivity, is launching a service for the build-to-rent market with 1,800 homes already signed up for certification.

The company, which was established in New York in 2013 with early support from then mayor Michael Bloomberg, has certified more than 600 million sq ft of real estate across nine countries.

WiredScore first entered the Irish market in July 2017 with a commercial real estate certification system that is used by property developers such as IPUT and Hibernia Reit. The company said it had enjoyed unprecedented success locally with the adoption rate for its system far higher in Dublin than in other European cities.

It has certified close to 100 buildings locally, including Dublin Airport, the Windmill Lane development, home to Pinsent Masons, Core Media and Informatica, and Wilton Park, which serves as the European headquarters for LinkedIn.

The WiredScore certification system is meant to create a benchmark enabling landlords, agents and tenants to have a good reading of a building’s internet connectivity potential. In much the same ways that certification exists for energy efficiency, WiredScore measures the number and quality of internet service providers as well as the bandwidth capabilities and reliability of connections that are based on a building’s infrastructure.

The company began to offer certification for the residential market in other markets as of May 2019.

WiredScore said launch partners for the certification scheme in Dublin include Tristan Capital, Patrizia, Irish Life Investment Managers, Kennedy Wilson and Round Hill Capital. The latter’s 216 apartment build-to-rent Bridgefield scheme in Dublin 9 will be one of the first residential developments in the Republic to be certified as part of the WiredScore Home programme.

According to WiredScore, 92 per cent of people it surveyed last month reporting that they had connectivity issues in their home. The survey of more than 2,000 adults found that over a third of respondents would not have moved into their current home if they knew how bad the wifi was.

WiredScore said its certification could help landlords proactively identify and rectify potential issues in existing assets as well as helping developers address such issues before buildings are even constructed.

“Demand for connectivity within the home has increased exponentially over the last 10 years, and by all forecasts will continue to grow rapidly,” said WiredScore president and managing director William Newton.

WiredScore recently raised $4 million (€3.86 million) in a funding round led by Patrizia and London-listed British Land, bringing total funds raised to date to about $13 million (€11.9 million).

Among early backers of the company was US president Donald Trump’s son-in-law Jared Kushner, who sold his majority stake in 2017 to Bessemer Venture Partners, an early investor in companies such as LinkedIn, Yelp and Pinterest.