Ryanair’s contingency plans, an end to net neutrality and Patrick Guilbaud on scallops 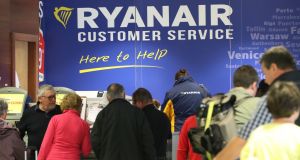 Ryanair’s December is proving eventful for all the wrong reasons, with news today that the airline may bring in pilots from outside the Republic as it bids to mitigate the impact of the threatened strike next week. Barry O’Halloran has the story, also taking an in-depth look in this week’s Business Agenda at the industrial relations travails facing the company, and considering the long-term impact on its business.

The Republican-dominated Federal Communications Commission in the US last night followed through on its convictions and scrapped net neutrality rules adopted towards the end of the Obama administration. Critics suggest the internet could now become a two-speed zone, with cable and telecoms companies suddenly much more powerful than before.

AIB’s chief executive Bernard Byrne yesterday said now might be a good time for the State to consider selling more of its dominant stake in the bank, pointing out that opportune periods “come and go”.

John FitzGerald takes up this theme in his economics column, acknowledging that the economic recovery is indeed vigorous, but also warning that further rapid growth will require unwinding measures, which could include higher taxes.

Eoin Burke-Kennedy has his housing hat on today, looking behind data on both planning permissions and repossessions and drawing a picture of the market that might not fit squarely into the Government’s vision of how it should look.

The brewing row between some newspapers and Renatus Capital over the latter’s production of a “synopsis” of the business news of Sunday titles is the subject of today’s Caveat, where Mark Paul argues that if the newspaper industry’s survival comes down to appealing to people’s ethics or morals, its war is already lost.

Peter Hamilton has a cheering story about Coolmore Bakery, a Bandon, Cork-based business that is investing in a product development centre as it tries to woo foreign supermarkets. He also brings news of a Tipperary-based whiskey company that has secured funding of €5 million to develop its own distillery.

And, to cap off his food-themed week, Peter has also cooked up an interview with veteran Dublin restaurateur, Patrick Guilbaud, who, when asked about the various sensory additions that famed UK chef Heston Blumenthal delivers to diners, said: “I don’t need music in my ear to listen to the scallops.”