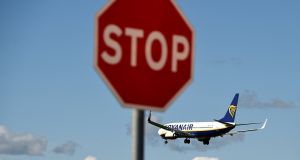 Ryanair’s options may include bringing in pilots from other bases in Europe, using training captains and calling on crew kept on standby. Photograph: Clodagh Kilcoyne/Reuters

Ryanair may bring in pilots from outside the Republic or hire planes from other airlines as it bids to mitigate the impact of a threatened strike next week.

About 115 of Ryanair’s estimated 390 pilots at Dublin, Cork and Shannon airports are planning to strike in a dispute over representation rights on Wednesday, December 20th.

A spokesman for the airline said it was preparing for potential disruptions caused by the industrial action by members of the Irish Airline Pilots’ Association (IALPA) .

“Ryanair will publish contingency plans to minimise these disruptions for our customers on Monday 18th on our website,” he said.

Sources said on Thursday the airline could be considering several options to cover any shortage of pilots resulting from the strike, one of a number that unions across Europe have called in recent days.

Those options include bringing in pilots from other bases in Europe, using training captains based within and outside Ireland to fly some of the routes and calling on crew kept on standby.

Ryanair could also hire craft and crew from other airlines to operate services from its Irish airports, but insiders say it is more likely to call on its own resources first before going this route.

Other carriers have done this in the past to tackle strikes. During a cabin crew strike in July, British Airways leased nine craft and their crews from Qatar Airways to fly services from London’s Heathrow Airport to Europe.

Earlier this week, Niall Shanahan, spokesman for IALPA’s parent union Impact, acknowledged Ryanair could have the resources to minimise the strike’s impact.

However, he warned that Wednesday’s action may be only the start of a series of strikes by both his union and others in Europe, unless Ryanair entered dialogue with its pilots.

Ryanair insists only a minority of its pilots intend to strike. It says just 28 per cent of those that it employs at Dublin Airport, its biggest base in the Republic, are involved.

The airline employs about 360 pilots in Dublin, 20 in Cork and 10 in Shannon. Most of those threatening to strike are captains.

Safety regulations require captains on all commercial passenger flights, so a strike involving this rank can ground aircraft and disrupt services.

Ryanair refuses to deal with the new organisation that pilots want to represent them, the European Employee Representative Council, saying that its existing approach offers staff a fair means of collective bargaining and has Supreme Court backing.

Along with Irish-based Ryanair pilots, those in Germany, Portugal, and Italy have also pledged to take industrial action.

Italian pilots may stop work for four hours on Friday as part of a general transport strike in the country. Portuguese pilots also intend to strike on Wednesday.

German union VC said its members in Ryanair could halt work at about the same time as those the Republic and Portugal. Spanish pilots also plan industrial action.

Pilots have been campaigning for a new collective bargaining system to replace the employee representative councils that negotiate for staff at each of the airline’s 80-plus bases across Europe.