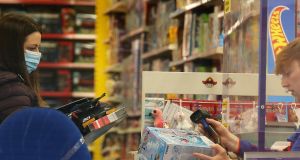 Retailers have written to Government urging them to class all retail as essential as stores fear a shutdown in advance of the critical Christmas shopping season, the Sunday Independent reports. Retail Excellence said closing shops over the next number of weeks would see an unprecedented number of retailers permanently close their doors.

The Collison brothers are the big winners in this year’s Sunday Times Irish rich list. The founders of payments group Stripe saw their worth jump 55 per cent to €7.75 billion. They were among half of Ireland’s billionaires whose growing fortunes offset declines for another seven billionaires, including Martin Naughton, JP McManus, Dermot Desmond, John Magnier, and the family behind Dunnes Stores. The biggest loser is Denis O’Brien, according to the paper, who has seen his worth drop 43 per cent last year. He now ranks as the 13th richest in Ireland, down from second two years ago.

Aer Lingus and its winter plans

Aer Lingus is weighing up its winter plans for Cork and Shannon airports after rival Ryanair announced it was shutting its bases at the airports amid continuing Covid-19 restrictions, the Business Post reports. The airline is in regular discussions with Government over recent weeks about the impact of current restrictions on its business, it says.

US private equity group Blackstone is considering a sale of its investment in Panda/Greenstar waste group Beauparc, according to the Sunday Times. The paper says the sale of the stake it acquired in February last year could value the business owned by Eamon Waters at close to €1 billion.

Ireland’s increasing importance as a site for data centres has made it a target for terrorism, the chief executive of Meath County Council has warned, according to the Business Post. “We also understand that there may well be agents from rogue states already on the ground here in Ireland waiting to be mobilised,” he said in a report connected to the county’s new development plan.

A corporate tax exemption that cost the State as much as all relief on private pension savings last year is being investigated by the Revenue Commissioners, the Sunday Times writes. The stamp duty exemption used in mergers and acquisitions cost the State €1.7 billion last year, a more than sixfold leap from the €273,000 claimed in 2018 despite a smaller number of deals applying for the relief.

A Kildare start-up has signed a deal with America’s Breeders Cup horse racing championships that provides a digital register of all medicines given to race horses in an effort to combat doping, the Sunday Independent writes. Equine MediRecord lets trainers log and monitor medicines used on horses. Once logged, the company says, the record cannot be altered.