Paschal Donohoe named chair of EBRD board of governors 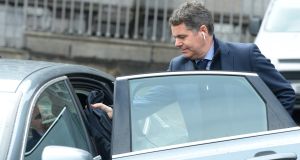 Minister for Finance Paschal Donohoe was unanimously elected on Thursday as chair of the board of governors of the European Bank for Reconstruction and Development (EBRD) for 2020-21 by counterparts from the organisation’s 68 member countries.

Mr Donohoe is the third Irish person to hold this role since the EBRD was established in 1991 to help develop and grow the private sector in former Warsaw Pact and Soviet countries. Since then, the bank has greatly extended its operations into North Africa and Asia.

The EBRD has provided a €10 billion Covid-19 solidarity package for this year to new and existing clients in its countries of operation covering short-term liquidity, working capital, trade finance and restructuring.

The EBRD’s annual meeting on Thursday, which was held on a virtual basis because of the virus, also selected a new president Odile Renaud-Basso, a French citizen, for a four-year term.

“I look forward to working with the bank’s new president Ms Renaud-Basso as she progresses its 2021-25 Strategic and Capital Framework against the backdrop of Covid which has exacerbated existing economic difficulties across the EBRD’s countries of operation in Eastern Europe, Central Asia and North Africa,” said Mr Donohoe.