Expansion will take total employee numbers in Dublin and Cork to 3,000 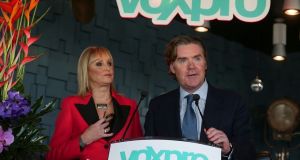 The jobs, which come as the company opens a new facility adjacent to its current headquarters in City Gate Mahon, will take total employee numbers across Dublin and Cork to 3,000 people. Voxpro employs a further 2,000 people outside the State.

The new roles will be across a wide number of areas, including management, training, tech support, customer experience operations, sales, trust and safety and finance.

Voxpro, which started out with six people working above a pub on Marlboro Street in Cork city in 1995, said further expansion was planned over the next 18 months as it looked to continue to scale operations worldwide.

Established by Dan and Linda Kiely, the company offers customer experience, technical support and sales operations solutions to international customers that include Google and Airbnb.

Canadian call centre giant Telus International acquired a 55 per cent stake in Voxpro last August for $58 million (€50 million) with an option to acquire the rest of the company in a deal valued at up to $141 (€121 million).

“After another exceptional year of growth for Voxpro. We are extremely pleased to be expanding our footprint in Cork,” said Mr Kiely, the company’s chief executive.

“This current expansion is a direct result of growth with current partners and new partners across multiple verticals in fast-growing tech, including adtech, the internet of things, fintech, retail, health tech, social media and ride sharing/transportation,” he added.

Recently filed accounts show Voxpro reported a €2.5 million pretax loss for the 12 months ending December 31st, 2017, as it invested heavily in the business.

Having recorded an 81 per cent rise in revenues to €60.4 million in 2016, the company reported another jump in turnover last year as sales jumped 50 per cent to €91.1 million.

7 Chris Johns: If this is to be the last lockdown it must work

10 Germany offers lessons for those who want a united Ireland