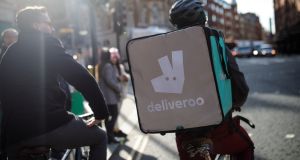 London-based Deliveroo was last year valued at more than $2 billion after raising nearly $500 million from investors.

The Irish arm of online food delivery company Deliveroo increased sales by more than 76 per cent last year as its parent company invested in expanding the business here with plans to operate in new cities in the Republic.

Recently filed accounts show the company increased turnover to €5.1 million from €2.9 million in the year to the end of December 2017 helping the business become profitable here for the first time since its establishment.

The company said its profit before tax was €136,747 in the period, a turnaround from a €2.4 million loss in the previous year.

“Deliveroo is going from strength to strength, with revenue increasing by over 76 per cent in Ireland last year. Our parent company is investing heavily in our expansion and our technology, both in Ireland and across the world,” a spokesman for the group said.

Its parent, the UK-incorporated Roofoods Limited, invested €2.3 million in the business last year in addition to a capital contribution of €5.7 million. Alongside its operations in Dublin and Cork, the company is hoping to enter new cities in the Republic this year.

The company said its gross profit rose £64.3 million from £1.1 million last year, with gross margin rising 23 per cent from less than 1 per cent, helped by growing maturity in existing markets, improved services and growing order volumes. In the Republic, the company’s gross margin increased from 12 per cent to 21 per cent.

The company said on Monday it was now working with 50,000 restaurants and 50,000 riders across the world.

Amazon.com also made two preliminary approaches for Deliveroo, the latest one about nine months ago, the Daily Telegraph reported last month.

Deliveroo, which competes with companies such as Just Eat, said in June that an initial public offering was not off the cards but was not in a hurry. – Additional reporting Reuters