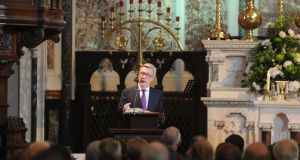 President and chief executive of The Ireland Funds Kieran McLoughlin: “the Dallas incident did occur on my watch. As chief executive, I have to take responsibility for that. Leadership has consequences and this crystallised my decision to leave.” Photograph: Aidan Crawley

The American Ireland Funds charity, which has raised $600 million, has taken legal action against a former employee at its Dallas, Texas, office for the alleged embezzlement of funds.

It is understood that the alleged fraud was discovered in March, some months after the person had left the charity. The charity is seeking relief of between $200,000 and $1 million, according to a court petition.

John Fitzpatrick, the New York-based hotelier and chairman of the board of The Ireland Funds, confirmed that the fund had filed a lawsuit in Dallas alleging that the former employee “stole” funds.

“The suit seeks relief from that theft, conversion and fraud,” he said. “When American Ireland Funds became aware of a financial issue in our Dallas office, we immediately began a thorough review of the matter.

“We uncovered evidence of a deliberate and deceitful fraud by a former employee based in Dallas. The exact amount misappropriated is still to be determined. No other senior employees were involved in the embezzlement of funds.

“In addition to seeking legal redress for these fraudulent acts, American Ireland funds has retained an outside law firm to conduct an independent review of our findings, to ascertain if there is any evidence of additional fraud and to recommend any additional fiscal safeguards and controls to further protect the fund against fraud in the future.”

The Ireland Funds is a major philanthropic foundation. Founded in 1976 by Sir Anthony O’Reilly and the late Dan Rooney, who subsequently served as US ambassador to Ireland, it has raised $600 million for various causes on both sides of the Border.

Last week, it emerged that Kieran McLoughlin, the New York-based chief executive of The Ireland Funds, was leaving after a decade in charge of the charity.

Speaking to The Irish Times on Friday night, Mr McLoughlin said: “It’s been my privilege to lead the Ireland Funds for 10 years. This year, we achieved a major milestone, having raised $300 million over that period, which was my personal goal and legacy. With my contract expiring in a couple of months, I had made the decision to step down.

“However, the Dallas incident did occur on my watch. As chief executive, I have to take responsibility for that. Leadership has consequences and this crystallised my decision to leave. I will continue to support the funds always.”