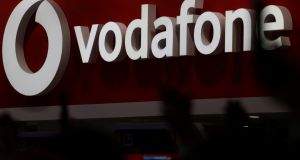 Vodafone said its key revenue measure deteriorated in the third quarter, down 40 basis points quarter-on-quarter to 0.1 per cent, reflecting continuing price competition in Spain and Italy and a slowdown in South Africa. Analysts had expected growth of 0.3 per cent.

The world’s second largest mobile operator said competition in the Spanish and Italian markets had moderated through the quarter.

“Lower mobile contract churn across our markets and improved customer trends in Italy and Spain are encouraging, however these have not yet translated into our financial results,” chief executive Nick Read said on Friday. He said the signs of improvement underpinned confidence in Vodafone’s full-year guidance.

In Ireland, service revenue grew by 1.4 per cent, driven by mobile base growth and prepaid average revenue per user (ARPU) increases, partially offset by promotional discounting in fixed line services. Total service revenue in the third quarter increased to €238.3 million. The company said its mobile customer base increased by 5,200 in the quarter, while it increase its fixed broadband customer base by 3,300.

Globally, Vodafone expects around 3 per cent growth in underlying adjusted core earnings for the full year, with free cash flow before spectrum costs coming in at about €5.4 billion.

Separately, the telco giant said it was “pausing” the deployment of Huawei equipment in its core networks until Western governments give the Chinese firm full security clearance.

The US and some of its allies, including Australia and New Zealand, have banned Huawei from 5G networks because of alleged ties to the Chinese government, while the firm has denied that its technology could be used by Beijing for spying.

Vodafone chief executive Nick Read said on Friday that the debate was playing out at a “too simplistic level”, adding that Huawei was an important player in an equipment market which it dominates along with Ericsson Sweden’s Ericsson and Nokia.

“We have decided to pause further Huawei in our core whilst we engage with the various agencies and governments and Huawei just to finalise the situation, of which I feel Huawei is really open and working hard,” he said.

Poland is set to exclude Huawei from 5G after it arrested a Huawei executive earlier this month on spying allegations. Huawei fired the man, who has denied wrongdoing.

1 Brown Thomas and Arnotts to cut 150 jobs due to coronavirus
2 47,000 homes need to be built each year to solve housing crisis, report says
3 Jervis shopping centre takes major tenants to court over rent disputes
4 Can Covid free your workplace of bureaucracy?
5 Hairdressing 7% more expensive in July as prices declined across economy
6 Dogpatch Labs and SOSV shortlisted to win NDRC contract
7 Seán FitzPatrick makes fresh bid to secure planning for new Greystones home
8 Digital pollution: ‘We have a pandemic of data and 90% of it is crap’
9 How Argentina and its creditors thrashed out a $65bn deal
10 Shed Distillery in Leitrim to open €3m visitor centre next month
Real news has value SUBSCRIBE