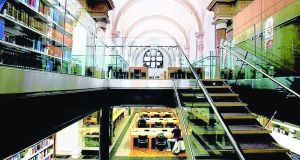 It is still the only Irish university in the Financial Times Top 100 global business schools but UCD Smurfit School has significantly dropped in this year’s rankings.

UCD Smurfit School has plummeted 24 places in the latest Financial Times Global MBA rankings, dropping from 70th place last year on the back of falling average salaries for graduates. At joint 94, however, it has managed to hold on to its Top 100 position.

In the survey of 155 schools globally, which polls alumni three years after completing their MBA, UCD Smurfit Graduate Business School was the only Irish university in the top 100. However, it was hit by a reduction in expected salary which sent it plummeting down the rankings. According to the survey, the UCD Smurfit class of 2013 earned an average salary of $102,643 in 2017, down by more than $10,000 on the prior year, while graduates earned 63 per cent more following the MBA – but this is down by 8 per cent on the prior year.

This means that the “value for money” ranking, which is calculated based on salary, course length, fees, opportunity cost of not working during the course, has also slid, down by 14 to 30. As a comparison, the best value school is Hough Graduate School in Florida, thanks to its low tuition fees and shorter course.

Some 81 per cent of graduates at UCD Smurfit were in employment within three months of finishing their course, also down from 92 per cent in last year’s survey. However, 99 per cent of alumni of the school would recommend it, while it also moved up five places to 63 in the “research” category.

Responding to the slide, Prof Tony Brabazon, UCD’s college of business dean, said that while it was “encouraging” UCD had maintained its Top 100 ranking for the 19th consecutive year, the intense competition demonstrates the importance of continued investment in faculty, facilities and programme development.

“It’s for this reason that UCD Smurfit School is implementing a five year strategy to become a Top 50 business school by 2020,” he said.

Standford Graduate School of Business in California moved up one place to reclaim the top spot from France’s Insead. Its alumni from the class of 2015 have the highest average salary at $215,000, up 114 per cent on their pre-MBA salaries, while it is ranked fourth for career progress. London Business School’s two-year programme, up to fourth place after a rare drop outside the top five, is the top British MBA, while Harvard Business School dropped to fifth, its lowest rank since 2008.

The biggest fall was recorded by Lancaster University Management School, which fell by 28 places to 70, due in part to one of the biggest falls in salary. Three years after graduation the typical salary was $104,000, down by $10,000, while most other schools have higher salaries than in 2017.