‘Residence’ to reopen in spring under new name after changing hands 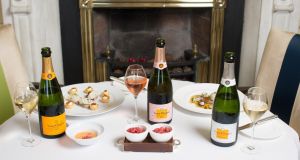 Residence on St Stephen’s Green in Dublin is due to reopen in the spring with an “all-inclusive” bar and restaurant on the site. Photograph: Kenneth O’Halloran

The Dublin venues Residence and Restaurant 41 on St Stephen’s Green will be closed for the next couple of months as its new owners fully refurbish the building and open an “all-inclusive” bar and restaurant on the site.

Residence, which was a private members’ club until December 2016, has been acquired by Press Up Entertainment Group for an undisclosed sum. Press Up, owned by Paddy McKillen jnr and Matt Ryan, said it would be investing “a significant amount of money on the refurbishment to bring it to our standard” and will reopen the business under a new name.

The rapidly expanding leisure and hospitality company, one of the largest in the State, purchased the leasehold and business at 41 St Stephen’s Green last weekend and immediately closed both venues.

Forward bookings for wedding and Christmas events made with the former owners have been cancelled and Press Up has advised some customers of the previous establishment that it cannot take bookings at this time. The company is currently directing people that had bookings to re-book with its other venues around Dublin.

The new business is on track to open after the refit in the spring and will take bookings for events at that stage. A general manager has yet to be appointed, but it is understood that many of the staff who were employed at Residence under the previous owners will be retained.

Press Up’s venues include the Clarence (along with Bono and The Edge) and the Dean hotels; restaurants Sophie’s, Roberta’s and Angelina’s, and the Liquor Rooms cocktail bar. It also owns the Bison bar, the Captain America’s restaurants and the Irish Wagamama restaurants.

Its recent openings include Dollard & Co and several new outlets in its Wowburger chain, while it acquired Temple Bar restaurant Elephant & Castle in late 2017.

Tower Records in Dublin and the Workman’s Club, which is frequently used as a music venue, are also part of the group, as is the recently refurbished Stella cinema in Rathmines. This summer, it plans to open a 40-room hotel called the Devlin in Ranelagh, which will feature a 50-seater “subterranean cinema”.

Residence and Restaurant 41 were bought from Peter Gaynor and his business partner John Collins, who had in turn acquired them from Mr Gaynor’s sister, Olivia Gaynor Long, in early 2017.

Company accounts for Molana Ltd show that Residence made a loss of €101,223 in 2016, the last year it was a private members’ club, having recorded a loss of €150,030 the previous year. Ms Gaynor Long had bought the club out of receivership in 2010. It was originally established by brothers Simon and Christian Stokes in 2008.

Revenues at Press Up increased by about 20 per cent to around €52.6 million in 2017, a year when it opened nine new venues in total, the group recently indicated.