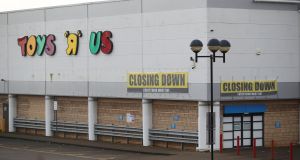 Closing down signs are seen outside the Toys R Us store in Coventry, England. Photograph: Reuters

The UK arm of Toys R Us is to close all of its 100 UK stores after administrators for the stricken business failed to find a buyer.

The retailer operated four stores in the North: two in Belfast, one in Lisburn and one in Derry.

Simon Thomas, of administrators Moorfields Advisory, had imposed a deadline of midday on Wednesday for potential buyers of the UK business of Toys R Us to declare their interest. The group’s US owner went into bankruptcy protection last year, although its UK arm had until Wednesday escaped collapse several times.

“We spoke to 121 people, of which about half were only interested in the stock and some were interested in the fixtures and fittings,” Mr Thomas said. “Some expressed interest in the whole business or part of it, but the last interested party left the process yesterday.”

Moorfields plans to have closed 25 stores by Thursday. The remaining sites will be kept operating until all stock is sold off at a discount. Toys R Us UK still employs more than 2,000 people, Mr Thomas said. – Copyright The Financial Times Limited 2018