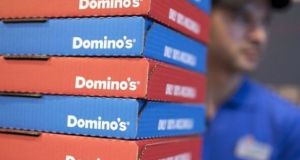 Domino’s Pizza Group said on Thursday it expected to meet market expectations for 2020 profit as a lower VAT rate and higher online orders helped it post a 19 per cent jump in third-quarter sales.

The company, a franchise of US-based Domino’s Pizza, has also benefited from the reopening of contact-free collections and the return of sporting events.

Domino’s said it expected annual underlying pretax profit to range between £93 million and £98 million (€102.7 million and €108 million), compared with £98.8 million for 2019. A reduction in the UK’s VAT rate to 5 per cent from 20 per cent in July helped Domino’s in controlling costs, which had weighed on the company’s first-half profit as it spent more on cooking and delivering its pizzas safely during the pandemic. Online sales now account for about 95 per cent of delivery sales in Britain, the UK’s largest pizza delivery chain said.

The company’s UK and Ireland system sales rose to £342.1 million in the quarter ended September 27th, from £288.2 million a year earlier. “At the heart of our future plans is realignment with our franchisee partners and we are having detailed discussions to agree a sustainable way forward,” chief executive Dominic Paul said, referring to a profit-sharing row with its franchisees. – Reuters