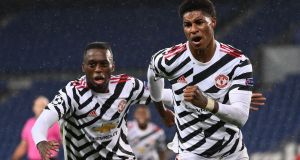 Manchester United slumped to a net loss of £23.2 million (€25.5 million) in the last financial year as the coronavirus forced soccer clubs to play matches behind closed doors and disrupted broadcast schedules.

United, who have made mixed start to the new English Premier League season, said revenue in the year ended June 30th fell 19 per cent to £509 million from the record of posted last year. It gave no financial forecast for the current year.

Revenue had been projected to drop to between £560 million and £580 million for last season because the club was not involved in the Champions League, but they withdrew the forecast figure when they published their third quarter results in May because of the impact of the Covid-19 outbreak.