Activity in the Irish services economy fell sharply in September 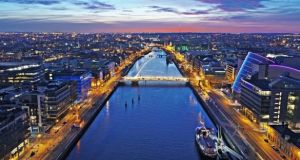 Total activity was weighed down by a renewed fall in incoming new business in September.

Total activity in the Irish services economy fell sharply in September, while new business declined at the fastest rate since June, in signs that the recovery in the sector petered out amid rising virus cases and economic uncertainty.

The latest PMI data from AIB suggests a combination of weakening demand and higher labour costs linked to the end of the temporary Covid-19 wage subsidy scheme led the rate of job shedding to level off, following a four-month period of slowing cuts.

The business activity index fell sharply into contraction territory in September, declining from August’s 52.4 to 45.8. The 50 mark separates growth from contraction.

The month-on-month decline in the headline figure of 6.6 points was the third-largest ever recorded, behind the double-digit plunges seen in March and April.

The latest figure signalled a sharp decline in output by the survey’s historical standards, albeit one much less severe than those registered from March through June.

Over the third quarter as a whole, the index trended at exactly 50, compared with 25.7 in the second quarter and 49.8 in the first. The next-lowest quarterly figure was 49.7 in the fourth quarter of 2010.

Business activity declined across all four sub-sectors monitored in September. The fastest decline was in transport, tourism and leisure, which had seen strong growth in July and only a slight fall in August.

Financial intermediation registered a drop in activity for the sixth time in seven months, while only marginal declines were seen in business services and the technology, media and telecoms (TMT) sectors. Over the third quarter as a whole, business services registered the strongest performance.

Total activity was weighed down by a renewed fall in incoming new business in September, following only a marginal increase in August.

Export demand also weakened, linked to Covid-19-related uncertainty and, to a lesser extent, Brexit. The rate of decline in new export sales was the fastest in three months.

Latest data signalled a seventh consecutive drop in the volume of outstanding business at Irish service sector companies. Firms mainly linked lower backlogs to a lack of incoming new work. The rate of depletion was the weakest in the current sequence, however.

By sector, the decline was most marked in transport, tourism and leisure, followed by financial intermediation and TMT respectively.

That said, the rate of job shedding was little-changed from August, remaining much less severe than those registered during the second quarter. This partly reflected solid workforce growth at business services firms.

Average input prices rose for the third month running, linked to increased labour costs due to the end of the Government’s wage subsidy scheme , PPE costs and higher shipping charges. Prices charged increased for the first time in seven months, albeit only slightly.

Excluding the March-May period, sentiment in September was the weakest since November 2010.