The accounting giant has bought the planning, economics and research consultancy 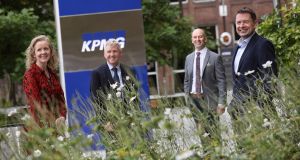 Accounting giant KPMG has acquired Irish planning, economics and research consultancy Future Analytics for an undisclosed sum. The business will be integrated into KPMG and known as KPMG Future Analytics.

Founded by chartered town planners and surveyors William Hynes and Stephen Purcell in 2010, Future Analytics provides planning and economic consulting services to the State, semi-State and private sectors, as well as to the European Commission.

Its workforce of 27 will join KPMG, with Prof Hynes and Mr Purcell set to lead the new unit.

Over the past decade, Future Analytics have consulted on projects such as the Dublin City Council Housing Strategy 2016 -2022, the Greater Dublin Drainage Project for Irish Water and A New Vision for Temple Bar for Temple Bar Cultural Trust.

KPMG has already collaborated with the consultancy on a number of projects, most recently on the Economic Analysis of Productivity in the Construction Sector report, which was commissioned by the Department of Public Expenditure and Reform (DPER), as well as its current work on a retail strategy for Dún Laoghaire-Rathdown County Council.

“We believe the ability to access the highest level of data insights is key to the investment decision making process in both the public and private sectors, leading to better choices and outcomes across the board,” said Seamus Hand, managing partner of KPMG in Ireland.

Prof Hynes said Future Analytics saw “huge benefits” for its client base as well as KPMG’s as a result of the deal, which would take the business “to the next level”.