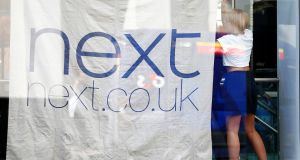 British clothing retailer Next returned to sales growth in its latest quarter, helped by warm weather in June and July

British clothing retailer Next returned to sales growth in its latest quarter, helped by warm weather in June and July and a surge in online sales, sending its shares sharply higher.

The stock, which had fallen 20 per cent over the past year, rose as much as 12 per cent on Thursday after Next also edged up its sales guidance for the full 2017-18 year and maintained profit guidance. Next had cut guidance in January and May.

Britain’s most successful clothing retailer this century, in terms of profits, has faltered over the past two years due to a broader slowdown in spending on fashion and footwear that it first identified in 2015.

It has previously warned sales would suffer this year due to a squeeze in consumer spending as inflation erodes earnings growth, and price rises on garments following the pound’s slide.

“I’m marginally less pessimistic than I was three months ago and it’s encouraging to see some of the improvements coming through on Directory,” chief executive Simon Wolfson said, referring to the group’s online business.

“But I still think we’re in a very difficult consumer environment for clothing, so we’re being very cautious about the rest of the year,” he added.

Wolfson said that while he expected price increases to moderate next year, it was much harder to predict when consumers would start spending more on clothes.

9 Dublin drops out of top 10 ‘most liveable’ cities