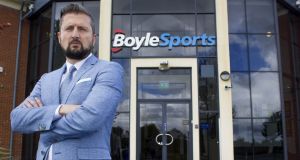 The chief executive of Irish bookmaker BoyleSports, John Boyle (61), is standing down for the second time.

Mr Boyle had previously retired from the chief executive role but ultimately took back control.

He is being replaced by his son-in-law Conor Gray who has worked with BoyleSports for 16 years having joined the company’s Baggot Road, Dublin, branch as a trainee cashier in 2001.

In 2013, Mr Gray moved to Asia to oversee relationship development work for the bookmaker and returned to the company’s head office in 2014 to take up the role of chief operating officer.

“After 35 years building BoyleSports from one shop into Ireland’s largest independent bookmaker, it would not be possible to step back if I were not confident that I was handing the reins to the right person,” said Mr Boyle, now the executive chairman of the bookmaker.

“I am confident I have a successor who can bring not only experience and expertise but also a passion for all things related to bookmaking in general and BoyleSports in particular,” he added.

Mr Boyle’s daughters Orla and Jenna hold senior positions with the company, which was founded in 1982.