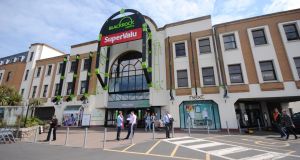 SuperValu’s outlet at the Blackrock Shopping Centre in south Dublin, which is the subject of a legal row.

A legal row has erupted in relation to the redevelopment of the Blackrock Shopping Centre in south Dublin.

The Musgrave Group, which operates SuperValu in the Blackrock centre, has claimed the refurbishment would cut down on car-parking spaces and mean a loss for the supermarket during the works.

The case was admitted to the Commercial Court list by Mr Justice Brian McGovern.

It claims intended works to the premises at Enterprise House, Blackrock, Co Dublin, would constitute an unreasonable interference with the quiet enjoyment of its rights under a 2005 lease and would involve a trespass on SuperValu’s premises.

Tim Kenny, group finance director of the Musgrave Group, said in an affidavit the loss of parking spaces would significantly and severely damage trading at the supermarket for the duration of the construction phase.

With a severely restricted car park, customers who drop in to buy about €25 worth of goods would very likely shop elsewhere, he added.

He said the Blackrock store is SuperValu’s flagship outlet in south Dublin and it could face huge losses as a result of the redevelopment.

The supermarket in question was originally operated by Superquinn, which was acquired by the Cork-based Musgrave Group in October 2011. It was later rebranded as a SuperValu outlet.