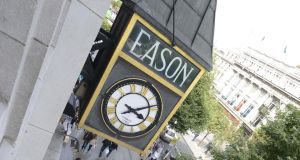 In spite of the challenging trading in the year to the end of January, Eason paid €500,000 in dividends. Photograph: Dave Meehan

Irish-owned books and stationery retailer Eason resumed dividend payments to shareholders last year in spite of a sharp drop in profitability and a 5 per cent decline in turnover, partly driven by the post-Brexit fall in sterling.

Group turnover, excluding joint ventures, reduced to €140 million from €147.2 million, with the reduction partly due to there being an extra week of trading in the full-year 2016 results.

In spite of the challenging trading, Eason paid €500,000 in dividends. This was the equivalent of 2.5 cent per share and was its first dividend payment in four years.

The results show that Eason’s turnover in the Republic declined by €3 million last year. Retail revenues fell by 1 per cent, franchise income was 7 per cent lower, while wholesale declined by 33 per cent.

However, digital revenues increased by 16 per cent. The results statement sent to shareholders noted that its city-centre properties had been impacted by Luas works, with footfall in the Dundrum Town Centre affected by an increase in parking charges in autumn 2016 by its new owners, Hammerson and Allianz.

In Northern Ireland, Eason’s turnover declined by €4 million, affected by movement in exchange rates and store closures. On a like-for-like basis, turnover in the North was up 2 per cent.

Brexit had a major impact on Eason’s trading last year. “The immediate impact of the vote on exchange rates resulted in the year being divided into two halves, with the first six months benefiting from year-on-year price inflation of 10 per cent in books, while the second half was dominated by significant sterling-based price deflation of 10 per cent,” shareholders were told.

Eason, which is led by managing director Liam Hanly, restored previous pay cuts for all employees on May 1st, 2016, at a cost of €900,000 last year, with an additional €500,000 impact expected in the current financial period.

It also booked exceptional costs of €500,000 relating to corporate restructuring costs and redundancies.

On a positive note, Eason’s average net debt reduced to €2.5 million from €7 million previously. The improving commercial property market also led to an uplift of €5.7 million in the value of its properties.

In terms of the outlook for the current year, shareholders were told trading has been “challenging” in the first six months.

Weak sterling relative to the euro continues to put pressure on cash margins as average book prices are lower than the previous year.

Eason has just launched a new three-year business strategy, aimed at further stabilising the business and driving growth and profitability.

“The ongoing focus of the retail strategy will be to improve the appeal and attraction of the stores to customers as exciting and important destinations that deliver great experiences,” the note to shareholders states.

Some €7 million will be spent on store refurbishments and innovation projects, including the rollout of a click-and-collect service for online purchases.

Its flagship store in O’Connell Street, Dublin is having its basement area revamped, with work also being undertaken at its shops in Dundrum, Dungarvan, Mahon in Cork and Swords.