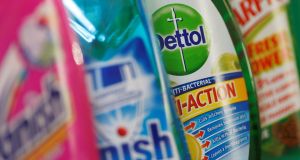 The maker of Durex condoms and Lysol disinfectants said on July 6th that the NotPetya virus, which hit several major companies on June 27th, interrupted output at many of its more than 60 factories and hobbled systems for everything from manufacturing to shipping.

It said at the time that excluding the attack and tax changes in India second-quarter sales would have been flat, as they were in the first quarter, which was Reckitt’s weakest in 15 years, hurt by a collapse of its business in South Korea and a failed product innovation at its Scholl footcare brand.

Reckitt’s shares got a boost last week when it announced the sale of its North American food business to McCormick for $4.2 billion (€3.6 billion), which is nearly 20 times the unit’s EBITDA (earnings before interest, taxes, depreciation and amortisation).

Reckitt sold the business in order to pay down debt from its purchase of baby formula maker Mead Johnson.

For the first six months of the year like-for-like revenue fell 1 per cent to £5.02 billion (€5.59 billion), the company said on Monday.

Adjusted net income rose 14 per cent and earnings per share rose 15 per cent.

Reckitt has said that performance in the second half of the year will improve, as comparisons ease. It expects sales to rise 2 per cent for the full year.

The company expects the Mead Johnson Nutrition business it just bought to see second-half revenue growth in a range of flat to down 2 per cent.