PwC fined £6.5m over audit of BHS before retailer’s collapse 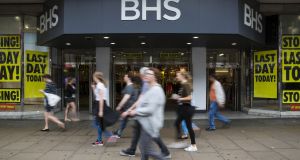 PwC said it was “sorry” that its audit work on BHS fell below the expected professional standards. Photograph: Getty

The UK’s accounting regulator has censured PricewaterhouseCoopers (PwC) and fined it £6.5 million (€7.4 million) over the group’s audit of UK retailer BHS two years before its collapse.

PwC’s audit partner Steve Denison was also fined £325,000 and severely reprimanded after admitting “misconduct”, the FRC said. Under the terms of the settlement, Mr Denison is “not to perform any audit work for a period of 15 years”.

The Financial Reporting Council said the Big Four accountancy admitted to and accepted fines over “misconduct” in relation to the BHS audit. The watchdog also issued a “severe reprimand”.

“We recognise and accept there were serious shortcomings with this audit work. We are sorry that our work fell well below the professional standards expected of us and that we demand of ourselves,” PwC said on its website.

It added: “Whilst the failings did not contribute to the collapse of BHS over one year later, they were serious and this is reflected in the Financial Reporting Council settlement.”

The FRC said under the terms of the agreement, PwC will “monitor and support its Leeds audit practice and provide detailed annual reports about that practice to the FRC for the next three years.”

PwC will also “review and amend its policies and procedures to ensure that audits of all non-listed high risk or high-profile companies (including private companies which employ at least 10,000 individuals in the UK) are subject to an engagement quality control review,” the FRC said.

The figures for the penalties reflect a reduction of around a third for “early settlement”.

BHS was sold in 2015, a year after PwC’s audit, for £1 to Retail Acquisitions, led by Dominic Chappell. The following year, it fell into administration and when no buyers could be found, the decision was made to dissolve the company. – Copyright The Financial Times Limited 2018