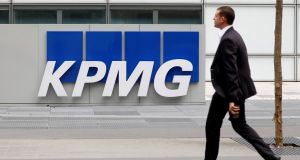 KPMG has been fined £4.5 million (€5.1 million) by the accountancy watchdog in the UK over its audit of insurance firm Quindell.

The Financial Reporting Council (FRC) said on Monday it had also ordered KPMG’s audit engagement partner, William Smith, to pay £120,000. KPMG’s fine was discounted for settlement to £3.15 million and Mr Smith’s knocked down to £84,000.

It follows an admission of misconduct in relation to the audit of the financial statements of Quindell for the period ended December 31st, 2013, the FRC said.

Quindell, now renamed Watchstone, was rocked by a series of scandals in 2015 and was also investigated by the Serious Fraud Office. Its shares surged between 2012 and early 2014 – valuing the group at about £2.7 billion – but the stock then plunged amid short-selling and after a US hedge fund publicly questioned the firm’s business model.

Its shares were later suspended after the Financial Conduct Authority launched an investigation into its accounts and founder Rob Terry.

The FRC said in a statement: “KPMG and Mr Smith, members of the Institute of Chartered Accountants in England and Wales (ICAEW), have admitted that their conduct fell significantly short of the standards reasonably to be expected of a member and a member firm and that they failed to act in accordance with the ICAEW’s fundamental principle of professional competence and due care.