Decision on whether to proceed with sale is expected shortly 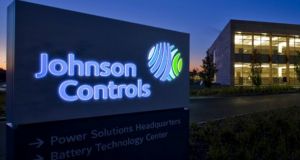 Johnson Controls International is drawing interest from private equity firms KKR & Company and Apollo Global Management for its power solutions business that could value the unit at as much as $12 billion (€10.2 billion), sources have said.

The firms were part of a select group of financial sponsors, which also included CVC Capital Partners and Advent International, that were invited to what’s known as a gold card meeting with Johnson Controls management last week to assess their interest in the unit, the people said.

A decision on whether to proceed with a sale is expected shortly, sources said .

The talks, which were preliminary, may not lead to a sale, they said.

Johnson Controls, which is based in Cork and also has offices in Milwaukee, announced in March that it had hired advisory firm Centerview Partners to explore strategic options for the unit with chief executive officer George Oliver saying the company’s focus is on improving operational execution and realizing merger synergy.

A $12 billion valuation would give the battery unit a multiple of about eight times earnings, based on a company statement that in 2017 the business generated $7.3 billion in revenue and $1.6 billion in earnings before interest, taxes, depreciation and amortization.

Johnson Controls also operates a buildings technology and solutions business that makes safety and security products, a business which was strengthened through its 2016 merger with Tyco International.