Technology is the way to beat Brexit for Lisburn security company 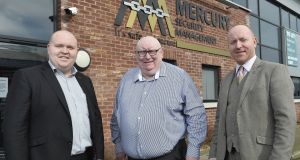 Mercury Security Management started out as a “feet on the ground” type of security business. Now, the family-run company has incorporated technology to grow in new markets.

Frank Cullen started the Lisburn-based company in 2001, after leaving the hospitality industry. He thought there was a gap in the market for a security provider that focused on a customer service perspective.

The company was operating for just five years when Frank saw there was a danger it could be left behind if it didn’t move with the times and provide integrated security solutions – combining physical security with technology.

Frank’s son Liam, a director in Mercury Security Management, says it started with a trip to the Netherlands in 2006. Frank went to visit a new command and control centre.

“He decided it was a great idea to bring that to Northern Ireland. The centre means we could man security for somewhere as far away as Australia or China.

“When the recession came, we could save customers money. If a business had a security officer working a 12-hour shift over seven days overnight, like in a shopping centre, we could remove that security officer and monitor security cameras from our command and control centre.”

From the centre, it’s possible to open doors and gates remotely, turn lights on and off, and audio challenge any intruder, according to Liam.

The change in approach meant that Mercury Security Management could target new markets in Britain and Ireland, he says.

With Brexit approaching, many businesses are battening down the hatches, says Liam. He sees that as an opportunity to increase Mercury Security Management’s footprint.

“I think there’s a lot of scaremongering going on around Brexit. A lot of businesses are reducing their spend on things like cleaning and security, but we would hope that might mean a good opportunity for us. We have that ability to provide security remotely, which saves on costs.”

Mercury recently secured a contract with Almac Pharmaceutical Services in Leicester. Almac is a Northern Irish company which has recently established a site in Dundalk, where Mercury also has a security contract, says Liam.

Being a local, family-run security business, making the investment in the security centre and pushing out into the Republic and Britain was a big step for Mercury.

“It was a case of taking on the big boys by competing with the larger multinationals like Securitas and the likes of G4S,” says Liam.

“We had the recession that hit us in 2008, but we were already planning for the new control centre before that. I think we’d take the same approach and move forward with the control centre if we had to do it all again, without hesitation – it’s been a great journey.”

Its next move will be to do away with paperwork through a new internal management portal and app.

“We have tablets where we can report issues and use controls, things like seeing where a window is open. This is really helpful in places like shopping centres where you get a lot of slips, trips and falls.

“We take photos of any spillages and report them straight away, so they can be cleaned up by housekeeping staff and reported to the centre manager. We’re trying to work with our clients on risk management, and share that responsibility,” he says.

“We feel our security officers are the first person most people see when they enter a site, so they’re representing that business as well as us.”

Liam says his father Frank is hoping to hand the business and its 400 employees over to Liam and his brother Francis, who is also a director, in the future.

“That might happen in three years’ time, but it’s hard to imagine because my Dad has a great personality within the business,” he says.